Ivanishvili takes part in street protest for the first time

Ivanishvili takes part in street protest for the first time 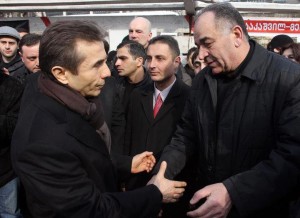 Opposition financier Bidzina Ivanishvili expressed his condolances to the father of a young man who died in a rain of police bullets almost six years ago, and said the Georgian people will eventually find the guilty ones and have them punished. (Photo: Georgian Dream.)

TBILISI, DFWatch – Georgian billionaire Bidzina Ivanishvili calls for the government to investigate a police special operation in 2006 which took the lives of two young men.

It’s known as the Vazagashvili case and gathers a crowd every year at the spot near Paliashvili Bridge where Zurab Vagazashvili and Alexandre Khubulovi were killed on May 2, 2006, in a rain of police bullets as the car they were driving was sprayed by machine gun fire in a hot pursuit situation.

This is part of a handful of deaths by special police forces that have raised strong criticism against the heavy handed behavior and lack of accountability afterwards. Vazagashvili’s father Iuri has campaigned together with opposition leaders for bringing those responible to justice.

Today’s protest was today held at the place where the special operation took the two young lives six years ago, but this time in commemoration of Zurab Vagazashvili’s birthday.

Hundreds of people showed up in the slushy weather, partially blocking one lane of the road past the Culture Ministry building. Opposition politicians both in and out of parliament were there, as well as rights groups and the wealthy financier Bidzina Ivanishvili. This is the first time the businessman has ever participated in a political demonstration. He was joined by politicians who are part of his coalition.

Ivanishvili said he wanted to express his condolences to the father of Zura Vagazashvili and that the government still has a chance to investigate this case and punish the guilty. Otherwise, the guilty will sooner or later be punished stricter, because, he said, ‘the Georgian society will manage to punish the guilty and objectively investigate the case.’