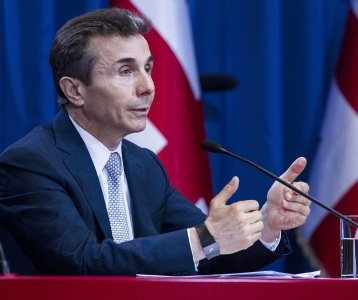 This comes after Ivanishvili many times has criticized Georgian media for bias and lack of professionalism.

The new talk show is one of two projects presented by Mokalake (“Citizen”), a civil society organization set up by Ivanishvili.

He said the talk show probably will be on air once weekly, and will start broadcasting in one month at the earliest, and certainly by the end of the year.

The former PM declined to provide further details, such as, who his co-host will be and which TV channel would carry it. But in an earlier statement by GDS TV (Georgian Dream Studio), which belongs to the former PM’s rapper son Bera,  GDS would air the talk show.

Two projects presented by Mokalake are the result of more than 8 months of efforts by the former prime minister, who left office soon after the 2013 presidential elections in order to dedicate himself to strengthening civil society.

Mokalake was established in early February and the organisation’s only initiatives so far are the two projects Olympiad of Civil Education, a competition focused on fostering civil education among school students, and Students for Self-Governance, focused on promoting the idea of autonomy among young people.