Ivanishvili has not voted

Ivanishvili has not voted 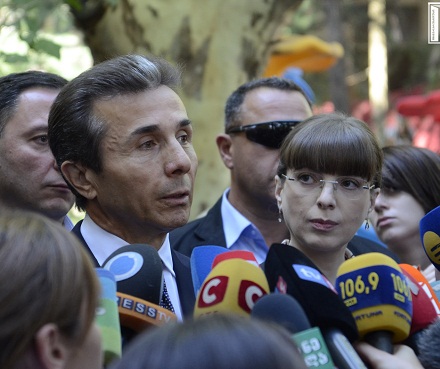 Bidzina Ivanishvili (left), leader of the opposition Georgian Dream coalition, and his wife, Eka Khvedelidze (right), arriving at an election precinct in Tbilisi October 1. He decided not to vote himself. (IPN.)

TBILISI, DFWatch – The leader of Georgia’s opposition coalition has not voted in Monday’s parliamentary election.

Ivanishvili is not a Georgian citizen, because the government revoked his citizenship soon after he declared his political goals. A non-citizen is not allowed to vote and get involve in political processes.

But after many appeals and recommendations, the government adopted constitutional changes according to which a non-Georgian citizen under certain conditions is allowed to vote and be a candidate for elections.

Bidzina Ivanishvili, a citizen of France, then said it is not a right decision to make and he won’t use these constitutional rights, but will fight to restore his Georgian citizenship.

“This election is to return justice and country developed democratically. Constitutional changes and issues related to my citizenship they lost function of state to the state. I said earlier and I repeat that I won’t use this right,” he said.

Today he came to Tbilisi together with his wife at a precinct in the center of the city.

He told journalists if the election goes ideally, National Movement won’t make it to the parliament at all. He expects his own political force to be in parliament with a 2/3 majority.

President Mikheil Saakashvili has already voted. He told journalists it is an historic day as today the country’s fate will be decided.

He came to the election precinct accompanied by his wife and younger son.