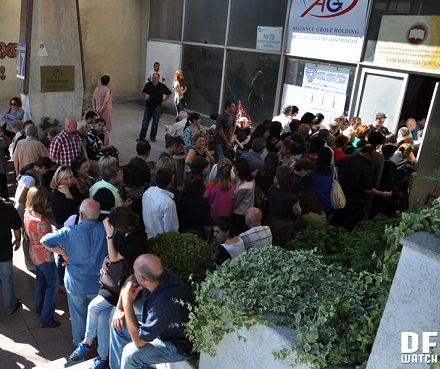 There are already reports of violations in the election in Georgia. (DFWatch photo.)

Transparency International Georgia (TI) reports that one of the main problems is that there are not enough ballot-papers and envelopes in some precincts.

In precinct number 54 in Vake, Tbilisi, voter Giorgi Jikia dropped one ballot-paper in the box, but took another one out of the precinct. The same behavior has been reported from different places in Georgia, making some suspect that what is going on is the so-called ‘Armenian fan’ trick: A person takes a ballot-paper from a precinct fills it in, and hands it to some other voter outside, who drops this ballot-paper into the box, then takes his own ballot-paper outside to give it to someone else. The purpose of this is to keep a check on what people have voted. In previous elections, people have been coerced into, and rewarded for, voting for the ruling National Movement party.

At precinct number 21 in Vake, several persons are without documentation and IDs, which is interrupting the election process. They stand together with people who register voters and give directions.

About ten people at precinct number 19 in Vake were allowed to vote without IDs.

TI reports that at precinct number 25 in Dusheti there were no voter lists, so people who register as voters use lists which are attached on wall.

At district number 27 in Gardabani, several voters asked whom to vote for, people registering voters answered to vote for number 5, which is the number for the ruling National Movement pary.

Georgian Young Lawyer’s Association had already written eleven complaints in the morning, including restriction of media, opening precinct late, campaigning in violation of the law, lack of ballot-papers, and not letting observers into a voting precinct.

From all over the capital there are reports from media and social networks that there are persons near precincts who write names of voters, who came to vote, which GYLA considers is asserting control over voters’ will.

Human Rights Center reports that in some of districts, the gadget which checks whether a person already has voted or not, is broken. Some people restrict observers from taking photos.

“Blatant violation of voters’ rights is observed in this polling station. Namely, every voter requests assistance in the cabin and other voter accompanies them into the cabin and indicates him/her to mark election number 5 on the ballot paper,” a statement from the organization says.

«There is chaos in the polling station now and the ballot process is going through many violations. Human Rights Center has filed relevant complaints on observed violations of the PEC # 28 of the Marneuli DEC 22.»

ISFED reports that at precinct number 9 in Akhalkalaki, there is not done any marking. There is chaos on this place and people vote without IDs. Commission members agitate and then give ballot-papers to voters.