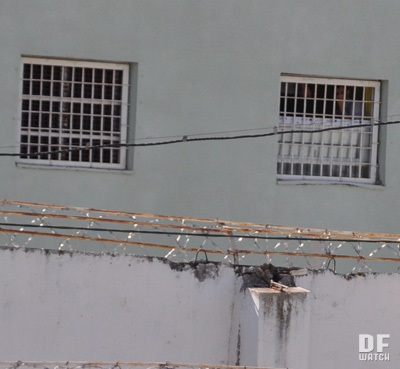 Most of the abuse took place at Gldani prison in Tbilisi, where the whistleblower Bedukadze used to work. (DFWatch photo.)

TBILISI, DFWatch–Prime Minister Bidzina Ivanishvili criticizes the chief prosecutor for having freed a former prison guard from criminal responsibility for torturing prisoners because he blew the whistle on the scandal.

The chief prosecutor Tuesday answered that he has no legal basis for changing his decision now, but that he believes it was a right decision.

A criminal case was launched against Bedukadze, a former employee of Gldani prison in Tbilisi. That was where most of the prison abuse scandal videos were shot, which he provided the media with two weeks before the parliamentary election in October 2012. He and several other employees were charged with torture and mistreatment, but the court abolished the charges against Bedukadze and released him from criminal responsibility, based on a request by the chief prosecutor, Archil Kbilashvili, who explained that Bedukadze ‘cooperated with the investigation for special conditions’.

The release of the abuse videos led to an outburst of anger towards the Saakashvili government and may have played a role in defeating the president’s party in the election. Bedukadze himself was not in Georgia while this happened, but communicated with Georgian media from Brussels. When he later returned to Georgia, he was detained for having taken part in torture, but soon released on bail. When the court freed him from criminal responsibility, it caused many people to be concerned.

Ivanishvili said he knew nothing about this case, but after becoming familiar with Bedukadze’s case he now considers it fair to protest against what happened. He also said he thinks the court’s arguments for making such a decision are not good enough and hardly believable.

“I’m sure no kind of special condition can be a reason to completely release a person who tortured people,” he writes in a statement, adding that the court was also ‘unfairly loyal to the other charged persons’.

16 persons have been charged in the prisoner abuse scandal, but the court gave them low sentences, even though they were found as guilty.

“I think this is unacceptable, moreover when the former government established a practice of violating human rights. I think this decision will interrupt avoiding such crimes in the future,” the PM notes.

He expressed hope that the chief prosecutor will be critical to the decision and examine it once more.

Later on Monday, Justice Minister Thea Tsulukiani responded to Ivanishvili’s statement by saying that she agrees with him and thinks it was not correct to release Bedukadze from criminal responsibility.

“The decision made about Bedukadze causes suspicions, and I agree that the case needs to be reviewed,” she said.

However there are no legislative opportunities to review a decision made by the court if there is no new evidence or new charges or any other nuances in the case.

Kbilashvili said on Tuesday that the decision concerning Bedukadze will not be changed, because there is no legal basis for reviewing it.

“Even if I wanted to change anything I have no legal basis for that,” he said, adding that the prime minister and other government members were not familiar with this case when the court hearings were held.

“The PM didn’t know the decision which I made, but the law grants the chief prosecutor the right to make this decision,” he said, noting that before deciding, he held consultations with colleagues, but this was not discussions of a political nature.

Kbilashvili said he thinks that the PMs position is based on high moral standards, which he respects.

“But in this case I considered that high standards of moral should not be applied and it was fair to make the decision which I made.”