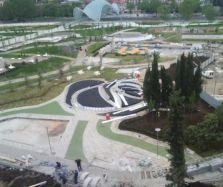 The construction work in Rike Park in Old Tbilisi has been controversial and some buildings may now be torn down. (Interpressnews.)

TBILISI, DFWatch — In Georgia, the prime minster and the president have clashed over what to do with newly built and half finished buildings.

During President Saakashvili’s rule, modern complexes have popped up around the capital Tbilisi and in other towns around the country, peppering a mostly derelict post-Soviet landscape with shining glass facades and unusually shaped, angular structures.

Speaking about one of the hotspots for such development , Rike park in the old part of Tbilisi, Prime Minister Bidzina Ivanishvili Tuesday said he might consider tearing down buildings that are ugly.

“It will be good if construction will be suspended, in my opinion and if specialists will get involved,” he said, adding that architects and designers should define whether there should be built new construction and finish it if they decide that is best, but if the buildings are ugly, then they should be torn down.

The PM thinks that there are too many emergency buildings in Georgia and the government doesn’t have the right to spend so much money in such projects like in Rike Park.

The president on Wednesday responded that Georgia shouldn’t destroy its image to the world by ‘Talibanization’.

He drew attention to a statement by the PM regarding the possible demolishing of constructions and said that in modern times there is only one case of demolishing on political grounds and it is in Afghanistan, implemented by Taliban.

“Construction employees people, many job places were set up in recent years, many families were assisted,” he said, adding that there were too many epochs of demolishment in Georgian history and too few periods of building.

“Last eight years was an epoch of building. I think it will be a huge mistake to demolish what we have built on our spite,” president said adding that people voted for improving social situation and not to demolishment.

The PM again responded to this issue on Wednesday saying that the president’s quote is related to construction of state cottages, which the new government tries to stop.

“It is clear why he speaks like that. Now they try to put on our credits what they have been doing wrong,” he said. “This man continues talking. Who is he talking to? At least he should look up, maybe someone will listen to him.”

Construction work at Rike Park is not the only subject of dispute. During the election campaign, Georgian Dream spoke of the construction of a new parliament building in Kutaisi, western Georgia, which they were against, as well as a bridge next to Rike Park, which also receives criticism from society, but in fact there have not been made any official decisions about what the new government will do regarding those constructions.

Saakashvili has frequently likened himself to the historic Georgian king David the Builder and took his presidential oath on the king’s grave near Kutaisi.