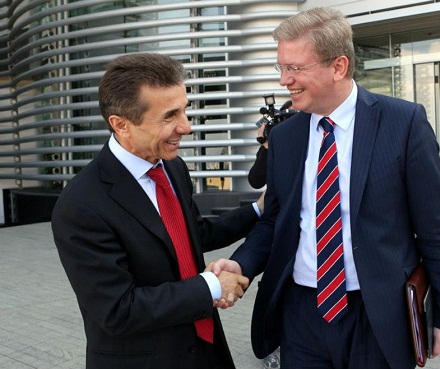 TBILISI, DFWatch — EU is giving another €22 million to Georgia this year in recognition of its reform efforts.

He remarked that today’s meeting is held only three weeks after a visit to Georgia by EU’s foreign policy chief Catherine Ashton; a month after the Georgian Prime Minister and President visited Brussels, and few weeks after he himself visited Georgia.

“So this meeting should be seen as part of a pattern of intensified EU-Georgia relations,” he said. “We take this relationship very seriously, it is important to us.”

“One thing which we discussed today, and which we’re very much looking forward to, is the informal Eastern Partnership dialogue which Georgia has kindly offered to host in the new year.”

This will be an important event to gauge progress in implementing the Eastern Partnership roadmap and fine-tuning our agenda in the final months ahead of Vilnius, he said.

“During today’s meeting, I recalled that EU assistance to Georgia has been significant, amounting to €181 million in the period of 2011 to 2013. On top of that, in line with our policy of offering “more for more”, the EU mobilized an additional €22 million for Georgia this year in recognition of its reform efforts. It would be great if I could say the same thing standing here next year.”