The fate of truth in our days

The fate of truth in our days 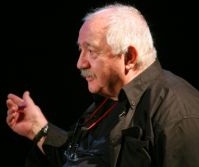 Renowned Georgian theater director Robert Sturua is one of the signatories of this open letter. (Photo: Interpressnews.)

The example of one small country

The reason behind this letter lies in critical comments made by western political circles and media concerning the government, which was elected by the majority of the citizens of Georgia in the October 2012 parliamentary election, commencing to fulfill their primary request, namely investigating the crimes committed by the National Movement in nearly all fields of our life throughout the past nine years and restoring justice.

This public request is categorical as we all believe that no democratic and constitutional state can be built and, generally speaking, no progress can be achieved without restoring trampled-down truth and justice.

As we believe, similar to other post-Soviet countries, the main obstacle on the path of the development of our country is that no substantial analysis of Soviet totalitarianism has been carried out and justice has not been restored due to many reasons. No one has answered for torturing and annihilating millions of people, for millions of devastated families and orphaned children. No lustration law has been ratified, while the names of thousands of murderers have yet to be made public. For this very reason, among many others, did life go around in circles, creating more or less authoritarian regimes in place of the collapsing empire. As early as the nineties of the twentieth century, the famous Georgian philosopher Merab Mamardashvili wrote that the forces that had brought about 1937 were still among us.

And it was precisely there, into the yet-to-be-fully-fathomed and overcome past, that President Saakashvili returned Georgia. There was, however, one difference. The modern darkness of the past required a bright façade, appearing in the form of glass police station buildings, for instance. And this democratic façade was being built to the extent that would suffice to dupe the west or to enable the European and American friends of the president of Georgia to convince themselves that democracy had indeed prevailed in Georgia.

Yet, the reality was bitter and cynical. The more help and support Saakashvili’s regime received from the democratic west, the more it craved totalitarian context and form. At the same time, had it not been for this permanent donor, that is, the west, the style of Saakashvili’s rule would have become completely indistinguishable from Soviet totalitarianism. To some extent, he was forced to suppress his instinctive longing for punishing and enslaving his own people, this way settling for the role of a quasi-dictator vested in the mantle of “the beacon of democracy”.

We believe that it is necessary to remember particular events from the recent political past of Georgia.

Immediately upon assuming power, the National Movement showed infinite arbitrariness, extreme disrespect for the law, justice, and the human being.

The parliament, the government, the judiciary, and the main channels of electronic media covering all Georgia wound up under the thumb of the president.

The constitution was being amended and modified, serving the sole purpose of maintaining and strengthening the president’s power even further.

Arrests carried out in a manner insulting human dignity. Torture, rape, and deployment of total fear became the main instruments of Saakashvili’s rule.

While being eliminated at the lower levels, corruption reached an enormous scope within the government itself. It has been assessed as elite corruption.

The entire field of private business fell victim to state racketeering. Businessmen complied with all of the authorities’ frenzies and paid mammoth amounts of money to them in an illegal manner.

All hopes were lost in terms of restoring infringed human rights through court, while citizens who had their private properties taken away from them or destroyed and who had been unlawfully arrested or laid off, etc., found themselves totally unprotected.

Six hundred people have died in the prisons of Georgia in the last two years, their corpses bearing signs of torture and degrading treatment. According to assessment provided by international human rights organizations, the number of people arrested for political reasons kept growing, having exceeded two hundred in the recent past.

Peaceful rallies were cracked down with exceptional brutality, entailing people being maimed and even killed. This phenomenon reached its climax on May 26, 2011.

In 2006, high-ranking officials of the government kidnapped Sandro Gvirgvliani, a totally innocent, decent, and successful young man, and tortured him in an unimaginably brutal manner outside the city, as a result of which he passed away. The authorities and the president personally patronized the offenders openly. The 2011 judicial opinion of the European Court of Human Rights reads, “The court is appalled at the coordinated actions by various branches of government aimed at preventing justice from being served in relation to this case.”

Western loyalty encouraged Saakashvili’s instincts even further. Political control over every social stratum and structure was established, including high schools, schools of higher education, the regions, and society in its entirety. Bugging phones en masse and hacking personal computers became a common practice.

Prior to the 2012 parliamentary election, the electoral fraud system and other related methods, polished to perfection through the years, were put to work, including beatings, stoning, kidnapping, terror, use of explosives, hacking oppositional political union “Georgian Dream” computers, bugging phones…

It was the great merit of western organizations that Saakashvili failed to crush the “Georgian Dream” victory in a bloody massacre. Had it not been for western observers and journalists being present in Georgia (the activity of Mister Gordon, US Ambassador to Georgia, for instance), the Khashuri incident would have happened in every region of Georgia. The Khashuri incident involved armed and masked members of punitive paramilitary groups assaulting an election commission and rushing the full ballot box out of the building.

After having lost the election, the president and his team once again turned to falsehood as their main weapon. They decided loudly to deny all the crimes committed by them no matter what type of evidence the judiciary may produce and to label this absolutely unavoidable legal prosecution launched against them as “political persecution”.

And now we would like to ask the questions which prompted us to write this letter, questions which transcend significantly the boundaries of the fate of one nation and rather concern the future of our democratic civilization in general.

How did it happen that throughout nine full years we never heard such loud “concerns” and expressions of indignation at the events described above? Indeed, international human rights organizations were well aware of all these facts as they were present, among others, in the annual reports by the Public Defender of Georgia.

How else could the president humiliate and punish his own people for them to hear at least one word of sympathy from the west, the west they believe to be their champion?

What else had the president to do to run out of protectors among western bigwigs?

What else had the authorities to do to avoid labeling legal processes launched to unearth the president’s and his team’s deeds as “political persecution”?

And why the NATO, the European Commission, or the government or media of one or another European country themselves are unaware of what is going on in our country in reality? After all, so many embassies operate in this country and so much money of the citizens of western countries is being spent to democratize this country and dispatch so many journalists here.

What kind of answer will those labeling the ongoing process of restoring justice as “political persecution” give to thousands of people who stand in long lines in front of the Prosecutor General’s Office, seeking justice?

What kind of answer will they give to children who know that their fathers have been humiliated by the authorities in prisons and the army, the very authorities patronized by high-ranking western politicians? How will they bear this burden?

And what are we to do, we who are not affiliated with any political party, yet continue to fight for democratic and cultural values and the salvation and progress of our country all our lives?

How, by what means are we supposed to push the story of our bloody interior beyond the democratic façade? How can we convince western political and financial circles that tyranny has developed in our country in the past nine years? How can we convince them to stop strengthening the remnants of this tyranny by means of their financial or verbal support?

How can we overcome lobbyism, this legal corruption, which has been nourishing our government with millions stolen from the citizens of western countries and Georgia for nine years?

And what type of future will our democratic civilization have if non-democratic regimes continue to be patronized in the future?