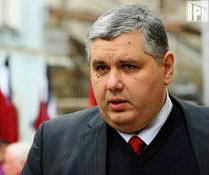 TBILISI, DFWatch–Koba Davitashvili, leader of the People’s Party, one of the Georgian Dream coalition partners, on Friday said he is leaving the coalition to run for president.

Davitashvili said the reason for his leaving is a systematic disagreement with Prime Minister Bidzina Ivanishvili’s people. This is the first time someone has left the coalition since the change of government in October 2012.

On Friday, the People’s Party leader said at a briefing that the main cause for his leaving was that the government said the acquittal of a former minister and Saakashvili ally, Bacho Akhalaia, was an example of the courts’ independence.

Bacho Akhalaia was minister of internal affairs, defense minister and prison minister in Saakashvili’s governments, but left the country after the National Movement’s defeat in the October 2012 parliamentary election. Upon his return some weeks later, he was detained.

The Prosecutor’s Office presented several charges against him. The trial lasted eight months and he was acquitted of the first set of charges.

Government officials said this is an example that the court is independent and that there is no pressure from the Prosecutor’s Office. This is ‘categorically unacceptable’ for Koba Davitashvili, who thinks that this might be followed by acquitting Vano Merabishvili, former Interior Minister and other former government officials.

“This is not a celebration of democracy. This is not the implementation of the major promise that we gave. The court is not independent in Georgia. I think this decision is a humiliation of people who still expect the restoration of justice,” he said, adding that this is a result of an unhealthy course toward cohabitation and unjustified concessions in the court reforms and amendments of the law on common courts.

He is leaving the Georgian Dream coalition – the majority bloc in parliament.

“People will decide the disagreement in the upcoming president election, where I plan to have a completely different program than yours,” he said.

After the parliamentary election in October 2012, Davitashvili had a disagreement with Prime Minister Ivanishvili and with Health Minister Davit Sergeenko; he said that if he left the coalition he would also leave parliament, ‘because voters voted for Bidzina Ivanishvili, but not for him.’

Davitashvili has not said anything about leaving parliament and he noted that Georgian legislation doesn’t require him to leave his post.

Coalition leader Ivanishvili has not made any statement about Davitashvili’s decision, even though this is the first time someone has left the coalition. The other members focus on the ethics of the decision, but not on his arguments.

“Koba Davitashvili acted unethically when he didn’t inform the coalition about his decision beforehand,” said Vakhtang Khmaladze, member of parliament and chair of the judiciary committee.

Another Georgian Dream lawmaker, Tina Khidasheli, said she is not surprised of his decision and that Davitashvili is a phenomenon.

“I wish him luck, but it won’t be easy for me to see the success of a loner MP, when there are steps taken in the country to strengthen democratic processes,” she told journalists, adding that she expected such a decision from him, and that he selected the correct moment to leave the majority bloc.