Ivanishvili and Medvedev meet at Davos

Ivanishvili and Medvedev meet at Davos 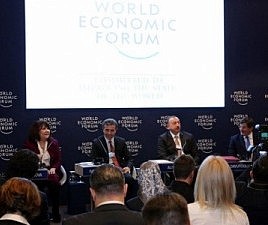 TBILISI, DFWatch — The Georgian and Russian Prime Ministers met for the first time in Davos Thursday and had a several minutes long conversation.

This is the first time heads of government of the two countries have met since diplomatic relations between Georgia and Russia were broken off in the wake of the August war of 2008.

“The Georgian Prime Minister himself came over to Medvedev, and they were talking for a few minutes,” one of the businessmen participating in forum told Ria Novosti.