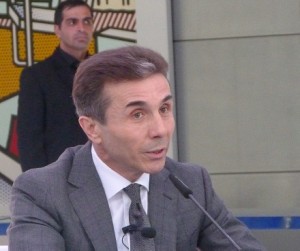 Bidzina Ivanishvili's wife is setting up a party and a TV station. (Photo: Eliso Chapidze.)

TBILISI, DFWatch – Many people in Georgia have been expecting that the billionaire who is challenging president Mikheil Saakashvili’s position would have a card up his sleeve. Now it’s revealed: A new TV station.

His wife Ekaterine Khvedelidze is part owner of a company which recently bought management rights to an already established TV station, which has a licence for cable and satellite.

The company is called Igrika, and transferred its management rights to Aktsepti Ltd from December 13, 2011 to December 31, 2013. Igrika was founded by the director of Maestro, a small independent TV station, and 80% of Aktsepti’s shares are held by Ekaterine Khvedelidze, Ivanishvili’s wife.

What the station will be called and when it will start broadcasting is still unknown.

Yesterday Tina Khidasheli, leader of the Republican Party which is aligned with Ivanishvili, also confirmed that the new television station is in the works, and that some of the goods damaged in customs recently are actually techincal equipment for the Ivanishvilis’ new TV studios.

“This is only 10% of the equipment the television really needs, but we are still waiting for part of equipment,“ she said.

Bidzina Ivanishvili is a Georgian philanthropist who after many years of keeping a low public profile recently announced that he’s intending to go into politics for the parliamentary election in October. Four days later, the president revoked his and his wife’s Georgian citizenship, which prohibited them from participating in elections or other political processes.

A recent court ruling ordered Ekaterine Khvedelidze’s citizenship restored, but the case was appealed to the Supreme Court. A few days ago Ivanishvili’s wife stated that once her citizenship is restored she will set up a new political party which will participate in the elections this fall.