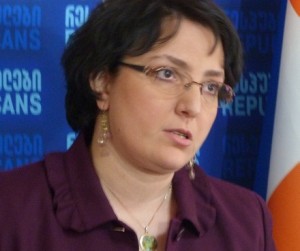 Tina Khidasheli, spokesperson for the Republican Party, says there is a wave of firings of teachers who support her party.

TBILISI, DFWatch – When Tamar Sukhiashvili, a teacher from the village Kakabeti, was told she was fired, it came as a surprise. The previous day, the school’s director had complimented her on her qualified work.

The reason for her firing turned out to be that she held views supportive of the opposition.

“I asked him to explain what were the grounds for my firing. He told me that he was carrying out orders from the top,” Sukhiashvili remembers.

She says that her employer asked her to write a letter of resignation, but she refused. Then she was told that he had already prepared her termination letter. She holds up the letter and says it only makes reference to article 38 of the labor code, which gives an employer the right not to give any reasons for firing an employee.

“They accused me of some absurd accusation, as if an anonymous letter had been sent to the general inspection of the Education Ministry which told about my cooperation with Ivanishvili,” Sukhiashvili says.

Bidzina Ivanishvili is a billionaire who recently launched an opposition movement and wants to run in this year’s election. Two polls showed him close in popularity to the ruling party of president Mikheil Saakashvili.

Later she met with the governor of the region she lives in, Kakheti. He told her that she was accused of ‘being one of the 10 members of Ivanishvili’s committee.’

“The second accusation he told me was that I had had a phone conversation with Ivanishvili. He crossed his fingers and said that it’s really easy for him to listen to the phone calls of ordinary citizens.”

Unfortunately Tamar Sukhitashvili’s story is not unique. Neither is the political pressure on teachers a novelty with the appearance of the businessman Ivanishvili as a viable threat to the ruling party’s power.

She says that before Ivanishvili’s appearance in politics it was not unheard of that teachers were warned about expressing political views. But this kind of political pressure in the workplace didn’t happen on the same level as we see today.

Part of the reason this can take place is that Georgian legislation, specifically the controversial Labor Code, gives the employer the right to fire an employee whenever he wants without explaining the reasons.

“The government tries to provide the support of the population by its usual methods, like threats, blackmails, firing, sending police,” Tina Khidasheli, spokesperson for the Republican party said today at a press conference about the wave of politically motivated firings of teachers.

“At this very moment many people are already fired around Georgia’s different regions on orders or they have verbally told them to write their own resignation and leave the schools.”

She says that most of the teachers do not write these appeals and demand an explanation or proper orders which explain why should they leave work.

There have been especially many politically motivated firings of teachers in the village Chorvila, where Ivanishvili was born and has many charity projects.

One of the latest victims is Inga Zambakhidze, teacher and representative of the Republicans in Sachkhere.

Zambakhidze says that what is taking place now in the Sachkhere region, Ivanishvili’s native area, is nothing less than political repression.

“Surveillance cameras are installed in front of our [Republican party] headquarters, they’re watching all the people who enter or leave, and then there is individual harassment against all of them. There are facts of arrests,” says Zambakhidze.

Tina Khidasheli promises that all such cases will be taken to court and in the end, these people will get compensation from the government. And then ‘Saakashvili will have to apologize’, she adds.