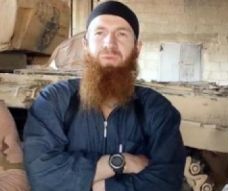 TBILISI, DFWatch–An Iranian news agency reports that Omar Al-Shishani, an ISIS commander who originally comes from Pankisi, Georgia, has died in an Iraqi air raid. The reports have not yet been confirmed.

IRNA reports that Iraqi fighter jets wounded and killed a large number of terrorists. The Daesh commander al-Baghdadi is reported to be injured, but his deputies, including al-Shishani, is reported dead.

“An informed source told IRNA Sunday night that al-Shishani was in charge of Daesh units and Abu Saed al-Karbuli was one of the top commanders of the terrorist group, who all were killed in the air raid,” the agency reports, “Abu Anis al-Suri and someone called Omar, of the commanders of Abu Kamal region in Syria, too, are among the dead.”

Reuters earlier reported that eight senior figures from ISIS were killed in an airstrike and that al-Baghdadi was not among them. The report, which was based on information from local residents and hospital representatives, didn’t name the eight persons.

“Iraqi air forces have bombed the convoy of the terrorist Abu Bakr al-Baghdadi while he was heading to Karbala to attend a meeting with Daesh commanders,” Reuters quoted a statement by the Iraqi military.

Abu Omar al-Shishani is a Georgian citizen who served in the army and whose real name is Tarkhan Batirashvili. He is an ethnic Kist and comes from the village Birkiani, in the Pankisi Valley in eastern Georgia. DF Watch contacted the Council of Elders in Pankisi to ask about Batirashvili’s death, but the council told us they do not have any information.

Kakheti Information Center (ick.ge) also contacted Batirashvili’s father, Temur Batirashvili, who still lives in Pankisi. He said that no-one has contacted him or informed him about the death of his son.

This is not the first time Batirashvili is reported to be dead, but so far his death has not been confirmed.

The US State Department offers USD 5 million for information leading to his capture.