One man dies in landslide in southwestern Georgia

One man dies in landslide in southwestern Georgia 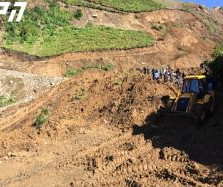 TBILISI, DFWatch–One man died in a landslide in southwestern Georgia on Sunday.

The victim, 58 year old Otar Davitadze, was on night watch supervising machinery in an open pit mine when a landslide hit in the village Akhalsheni, Khelvachauri.

About 8,000 cubic meters of soil covered the area, and Davitadze was buried along with two mining machines.

A search was launched at 07:11am to try to clear away the mud. Before that, sappers cleared the area of explosives which had been used for mining work. One of the machines buried in soil was carrying explosives.

The Interior Ministry has launched an investigation about death due to negligence.

About 60 rescue workers were involved in the search, which lasted five hours.

Geologist Tariel Tuskia told after examining the site that there may be further landslides. About 200,000 cubic meters of soil was released, he told Interperssnews.

Locals have noticed cracks in the walls of their houses which they blame on the frequent explosions. They blame the tragedy on the mining work.