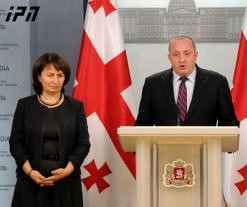 Chikhradze is active in the New Rightists Party and is most known for her work as a youth activist in the National Liberation Movement, which aimed at gaining independence from the Soviet Union.

In the parliamentary election in 2008, she refused to serve as MP in protest against election fraud.

In January 2013, she was elected leader of the New Rightists Party.

President Margvelashvili said his administration has offered her the position as political adviser due to her long and impressive political experience.