Investigation into protest against Muslim school

Investigation into protest against Muslim school 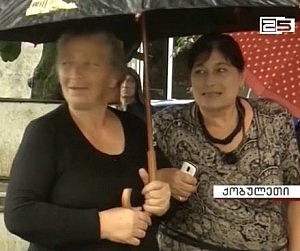 TBILISI, DFWatch–Georgia’s Interior Ministry has launched an investigation into an incident in a small town about a pig head being placed on the door of a Muslim religious school called a madrasa.

The incident happened in Kobuleti as locals were protesting against the establishment of the madrasa. Someone among the protesters killed a pig and hung its head on the door of the building.

Locals blocked a road on Monday and warned that they would interrupt the opening of school in the future.

An investigation has been launched pursuant to section 151 in the criminal code about threatening with killing or damaging health or damaging property and it is punished either by fine, community service or jail up to one year.

Human Rights Education and Monitoring Center (EMC) thinks the incident shows signs of being a violation of section 156 of the criminal code, about persecution for religious or other reasons, and can be punished by fine or jail up to three years.

EMC spoke with representatives of the Muslim community who say that Wednesday’s incident was an insult of Muslims’ religious feelings.

Shamil Kakaladze, head of Relations of Georgian Muslims, said that during the construction of a boarding school in summer, a certain group of locals was constantly harassing them by preventing them from entering the construction site or verbally insulting them. They complained to police, but the police didn’t react and said that there were no signs of crime in their actions.

Tariel Nakaidze from Georgian Muslims’ Union told EMC that locals have become more active as the opening day of the boarding school is getting closer. He said protesters threw stones at the building and insulted Muslims.

EMC believes that in order to prevent religious confrontation it is necessary for police to take effective preventive measures, and even more so when in the last couple of years the country has seen a number of religious conflicts in Nigvziani, Tsintskaro, Samtatskaro and Chela.

Later on Wednesday, eleven human rights organizations issued a statement calling on law enforcement bodies to react. They also write that in recent years persecution and harassment of Muslims has become frequent, which is a result of ineffective and inadequate reaction by the government to this type of crime.

“We also appeal to the government of Georgia to take decisive measures in order to end persecution of citizens and discrimination on religious grounds,” says a statement signed by eleven organizations.

Kakaladze explained that boarding the school won’t be an educational facility, but more like a shelter, as its residents will go to school, but they are socially vulnerable. The purpose of building this school is to help those children. So far about 40 children of eighth or ninth grade are registered to attend the boarding school, which will open on September 13.