Interview: Francis Fukuyama on the war in Ukraine and NATO expansion

Interview: Francis Fukuyama on the war in Ukraine and NATO expansion 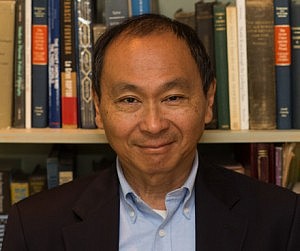 Francis Fukuyama is professor of political science at Stanford University.

Many Georgians are discussing how far Mr Putin will go in his attempt to subdue his neighbor Ukraine. Maybe he will take this important seaport of Mariupol and go to Odessa or even Kiev? What’s your opinion about the outcome of this conflict?

I don’t really have a prediction about this. I think that he set off a dynamic domestically in Russia where it’s very hard for him to back down, and so my assumption has been that he is going to control at least the Russian speaking parts of Ukraine by one means or another. I think the only serious deterrent right now is the fear that if he does occupy Mariupol and that area it will get into a kind of long guerrilla war with the Ukrainians and he may not want to pay that price, but I don’t think that the sanctions or the Western response at this point is really going to be sufficient to stop him.

What should the US or generally the West have done to stop Putin? Do they have any real leverage over him?

I think that they could have moved to stronger economic sanctions earlier on and I think that the main thing we got to do now is to turn NATO back into a serious military alliance. It hasn’t been for the last 20 years. It’s been more a democracy promotion organization. But I think they need to really start trying exercises and forward deployment of troops and working out a lot of logistic issues and so on.

What about NATO expansion? I mean inviting new members.

This is going to be a difficult issue for me to talk about this in Georgia. I think that NATO expansion to Georgia is problematic just for strategic reasons, because it is extremely difficult simply as a matter of geography to defend Georgia, and I think you are going to have a similar problem in Ukraine as well. At this point, given what the Russians have done, you may actually get into a military conflict with Russia before you expand NATO, meaning that I think the possibility of direct arm supplies to Ukraine is on the table, certainly bolstering of military support for Georgia is I think a necessity, but formally committing to defend the territorial integrity of these two countries I think is just very difficult. It’s purely based on a judgment of military logistics and I really don’t see how they can do that.

Do you totally rule out direct military conflict between the NATO states and Russia?

No, that’s what I was just saying. I think that’s more likely than actually expanding NATO. I mean, those are two separate things. You can supply military equipment to Ukraine and Georgia without formally extending the alliance guarantee.

Is it feasible that Mr Putin changes his course under western sanctions or for some other reasons?

Well I don’t think that he is likely to do that. I mean as I said I think that the trouble that he has set off this internal dynamic, there’s so much nationalism in Russia and his own propaganda has been so good that he himself would look very weak if he backed down in face of sanctions. So I am not optimistic that it is really going to have much effect. I think that the only thing that will affect him is the prospect of actually having to fight a prolonged and very messy war like in the former Yugoslavia.

But this is detrimental to Russia too.

Oh yes, but I think that’s going to be more of an issue for him than economic sanctions.

What about Georgia. What’s your view of Georgia because the previous Georgian government was very liberal and many of its members were fond of your ideas. How do you see it now two years after they lost power – a success or the opposite?

Well, like a lot of other people I’m concerned about the prosecutions of former members of the government because it does look like.. It’s hard for outsider to judge, but it’s certainly does look like political retribution. So I think they have got to be very careful about avoiding that appearance.

What’s the odds of Georgia becoming a modern European state?

I think that the main issue for Georgia is that both sides have to learn to play by truly democratic rules. The previous government committed abuses as well, and so I don’t think the fault is not simply on only on one side, but I think that the real issue is to be able to transfer power using fair rules and an impartial set of institutions. I think that’s really Georgia’s challenge.

And about global politics with the rise of the BRICS that counts more than 40 percent of the world population and they are now working on supplanting the International Monetary Fund and the World Bank with their own financial institutions. What’s the prospect of..

I don’t think that this is a really serious threat. I mean, BRICS is an artificial construct. If you think about those countries they don’t really have any much in common. I mean, what does Brazil has in common with Russia apart the fact that they periodically get annoyed by the US. They got very different economies, very different histories; one is a democracy, another is an quazi-authoritarian country. So I think in a long run the prospects of real cooperation with them is not very great.

So you still think that the liberal economic system is the end point of history?

Many people argue that US is losing its grip on the world. What’s your opinion in this regards?

I think that after two very long and costly wars in the Middle East, the American people are tired of having foreign engagement, which I think happened after the Vietnam War as well, and so I think that explains a lot of recent American foreign policy. After Vietnam, we retreated and then made a big comeback under Reagan, so I think that that could still happen in the US as well. The more serious concerns I have it has to do with the American political system, because I think that we got some real problems in decision making because of the high degree of  polarization in Washington, and so I think before we are going to be a model of democracy for other people we have to put our own house in order.

And the last little bit crazy question. Are we heading towards a third world war? There are many very dangerous developments. I mean not only Russia but in the Islamic states.

I think this these are all serious issues, but they are all separate ones, in a certain sense. So in that sense I don’t think you’ll have a world war in which you’ll have two big coalitions of countries. For example ISIS in the Middle East, which everybody is very worried about. There is not a single great power that supports them. The Chinese, Russians, Americans, Europeans all want to see this entity put back in its place. So in that sense I don’t think that all these different conflicts are all necessarily related to each other.

Francis Fukuyama is professor of political science at Stanford University. He is in Tbilisi participating in the International forum “The Future of Democratization: Lessons of Building a Modern State in 21st Century” taking place in Tbilisi Courtyard Marriott Hotel on Sept 1-3 organized by Stanford University’s Center on Democracy, Development, and Rule of Law (CDDRL) in partnership with the Economic Policy Center (EPRC) of Georgia.
By DFWatch staff| 2014-09-03T08:32:10+04:00 September 3rd, 2014|Categories: Interviews|Tags: Francis Fukuyama, the war in eastern Ukraine 2014|0 Comments