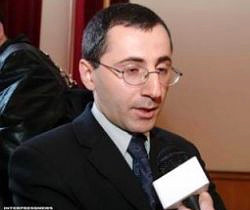 TBILISI, DFWatch–Interpol did not ask Georgian prosecutors for additional information before deciding to call off the search for a former justice minister.

Yesterday, the story broke that Interpol no longer has a so-called red notice on its webpage seeking the arrest and possible extradition of Zurab Adeishvili, who was chief prosecutor and justice minister during Saakashvili’s two terms as president.

He is currently abroad, while wanted in his home country for torture of prisoners, beating opposition demonstrators, and taking a TV station off the air.

The chief prosecutor’s office in Georgia now confirms that Interpol has called off the search, and says it was not asked by Interpol for additional information before the decision.

‘The Prosecutor General’s Office was therefore unable to present additional argumentation about the reasonability of continuing the search for Adeishvili,’ a statement published Wednesday says.

The reason Interpol called off the search is that Adeishvili has been given refugee status by ‘a certain country’, according to a letter to the Prosecutor General’s Office received from Interpol’s General Secretariat on April 9.

Lawyer Levan Alapisvhili told DF Watch that it is unheard of that a person is removed from an Interpol search notice without the participation of the state in question, because Interpol signs an agreement with the state and the relationship is regulated by this agreement.

“I don’t know what happened in this particular case,” he says.

After Saakashvili unexpectedly lost the parliamentary election in 2012, Adeishvili fled the country, as did many of the National Movement’s top people. He has since been caught up in several criminal investigations, as the new government seeks to hold former officials accountable.

The ex-justice minister is charged in three criminal cases, involving torture of prisoners, a violent crack-down on an opposition rally in 2007, the closing of a TV station, and a scheme to run an opposition-affiliated bank into bankruptcy.

He has allegedly received political asylum in Hungary and was later spotted in Kiev.

Adeishvili’s lawyer Otar Kakhidze told DF Watch that he has regularly provided information to Interpol about Adeishvili and asked them to revoke the search notice for his client. He told us that they notified the organization about witnesses changing their testimonies and that the charges against Adeishvili no longer have any legal basis.

But Georgian prosecutors are not discouraged by Interpol’s decision and plan to ‘carry out relevant procedures foreseen by legislation’, the statement says.