No confirmation of claim Adeishvili is in Hungary

No confirmation of claim Adeishvili is in Hungary 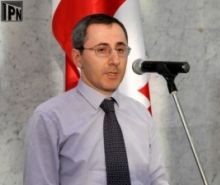 TBILISI, DFWatch–It is unknown in Georgia whether former Justice Minister Zurab Adeishvili is in Hungary and whether he was appointed as advisor to the Hungarian president.

What is known is that Giorgi Sabanadze, the former chairman of Tbilisi Development Fund, who was subject to an Interpol red alert, was released by an Italian court and granted political asylum in Hungary. Sabanadze is charged with embezzlement of more than USD 20 million.

A few days ago, Sabanadze’s lawyers said Italy had released him and refused to extradite him to Georgia, as he had been granted asylum in an EU country.

On Sunday, lawyers confirmed that it was Hungary which granted him asylum.

Irina Janelidze, one of his lawyers, told DF Watch that this is the only information she has and that other details are so far unknown, such as when he applied for asylum and when his request was granted and why.

“I know for sure that he was in Italy yesterday. I don’t know where he is today,” she said. “I can confirm that Hungary gave him political asylum.”

“We know what you know about his location,” Gocha Skhvanidze, his lawyer told DF Watch.

A few days ago, Hungarian Prime Minister Viktor Orban answerd a question about Adeishvili’s being in Hungary. The question was asked by Sulkhan Khabadze, a member of Chatham House and London resident, after a speech by Orban at London’s Chatham House.

Khabadze said that Adeishvili left the country after the parliamentary election and is charged in several different cases, and that the charges include criminal violations. Orban asked him to be brief and ask a direct question, but he continued giving information about Adeishvili. He said there are speculations in Georgian media why Adeishvili picked Hungary and not other European countries.

“Some point to Adeishvili’s close ties with high officials in your government. I hope you will have the opportunity to better get introduced with the details of this case,” Khabadze said.

A few days after the press conference, Georgian media carried a report, based on an anonymous source, that Adeishvili has become an advisor to the Hungarian president, János Áder. Official government bodies and the members of National Movement party have contributed no information about this claim.

Adeishvili’s lawyer, Gocha Svanidze told DF Watch that he has no information about his client being appointed advisor to the Hungarian president and suspects that his family isn’t aware of it as well. He also said that it is not his competence to have such information, even if it were true.