International ‘pro-family’ congress to coincide with Day Against Homophobia

International ‘pro-family’ congress to coincide with Day Against Homophobia 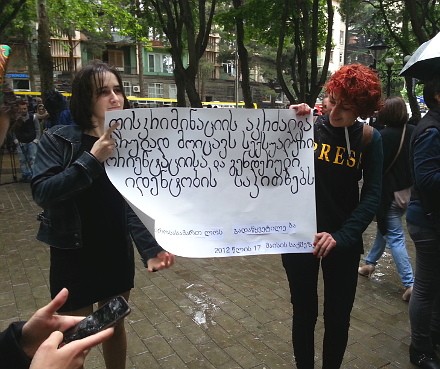 A gathering was held on May 17, 2015 in secrecy to avoid possible harasment for radical groups (DFWatch)

Georgia was chosen as the site for the tenth World Congress of Families, Christian News Wire reported.

The international conference and festival will be held in Tbilisi on 16–18 May, so it will coincide with the Day of Family Strength and Respect for Parents on the 17 May that was established by the Patriarchate of the Georgian Orthodox Church last year.

The World Congress of Families is an NGO based in Illinois USA. Its mission statement reads that its aim is to ‘affirm that the natural human family is established by the Creator’.

The organisation stands for the idea of marriage between a man and a woman and opposes ‘pornography, promiscuity, incest or homosexuality’ which it sees as deviations from ‘natural sexual norms’.

American NGO Southern Poverty Law Centre has included the organisation in its list of anti-LGBT hate groups. It is also notorious for its links with the Kremlin and its support for the 2013 Russian LGBT propaganda law.

The local organising committee for the conference includes activists from the Demographic Renaissance Foundation of Georgia Levan Vasadze and Tinatin Khorbaladze.

Mr Vasadze told Christian News Wire that ‘[w]e Georgians are honoured and humbled by this great opportunity and privilege to host World Congress of Families X. As one of the oldest Christian nations on earth, we think this will be a refreshing opportunity for me and my fellow Georgians to meet Westerners (unlike those sent to Tbilisi by George Soros) who affirm human rights for all persons from conception to natural death but also defend the Truth, Beauty, and Goodness found in the Natural Family as the fundamental and only sustainable unit of society’.

The 17 May is internationally observed as the Day Against Homophobia, Transphobia and Biphobia.

In 2013, Tbilisi saw unprecedented violence when Orthodox Christian activists, including members of the clergy, prevented a peaceful LGBT rights demonstration and attacked its participants as the police was trying to evacuate them. Twenty-eight people were injured, among them two journalists and three policemen.

Although the Patriarchate officially dissociated itself from the events, it has since attempted to reclaim 17 May as the day of the values which it brokers, in its view, in opposition to the LGBT rights movement.

Following the violent events, the government led by the Georgian Dream party stressed the public right to demonstration. Prime minister Irakli Gharibashvili has, however, called for amending the constitution so it defines a family as a union between a man and a woman.

Earlier this year, the Public Defender’s Office issued a report in which it concluded that Georgia took ‘no real steps towards protecting the rights of sexual minorities’.

All defendants in the 2013 anti-gay rights attack case were recently acquitted despite aggravating video evidence.

Irakli Vacharadze, one of the leaders of NGO Identoba commented the attempts of Christian groups to reclaim the 17 May.

‘I do not believe that there is any conflict between us and the Church in claiming the 17 May, because, luckily for us, we didn’t set the date, and sadly for them, they simply appointed the date and invented the Day of Family [Strength and Respect for Parents] just to silence yet another community. We’ve been able to show that the Orthodox Church hates not only the LGBT people, but also women, artists, painters — like most recently Lia Ukleba who simply painted Saint Mary with a gun at her head. The Church tries to censor every expression of individuality in Georgia, including anything that is remotely related to sexuality. I believe that the Church is about dominating public spaces regardless the origin of the community: sexual minorities, women, or religious minorities. It’s a larger trend than a simple juxtaposition of LGBT politics on one hand and the Church politics on the other hand. We are looking at a fight of David and Goliath. David changed, but Goliath remained the same’.