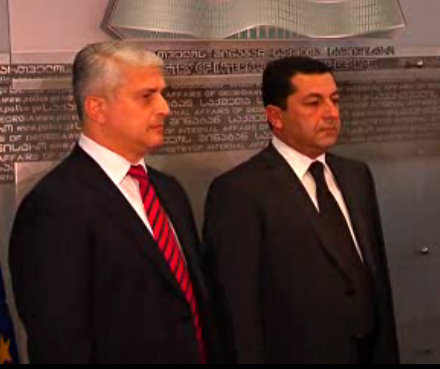 TBILISI, DFWatch–The deputy interior minister has been detained for posting a sex video on the Internet allegedly involving a journalist who had criticized him.

Interior Minister Irakli Gharibashvili Sunday evening held a press conference to talk about the investigation into a case of gross violation of a person’s privacy. He said the video was shot by the previous government, namely by the then omnipotent Constitutional Security Department of the Ministry of Internal Affairs, or KUDi in Georgian.

“The footage was shot by KUDi during the reign of the previous government during a campaign of psychological pressure, black mail and with a goal to force cooperation with law enforcers,” the minister said.

He said that after the change of government, this and other similar recordings have been kept secret in accordance with law to avoid any further damage.

Garibashvili said that Gela Khvedelidze, his first deputy, while being libeled by the journalist, in order to discredit him, intentionally leaked the video to the Internet, thus committing a serious crime.

“But we do not have guarantee that copies of the footage aren’t in the hands of former government officials,” Garibashvili added.

The minister noted that his deputy Khvedelidze was responsible for the safety of the footage.

A video apparently shot with a hidden camera was posted on the Internet May 4 and showed sex between three persons, two men and a woman, involving homosexual scenes too. Although the video was blocked soon thereafter, many people watched it as it spread swiftly via Facebook.

The publication of the video is widely perceived as a gross intrusion on privacy, and the case is under investigation.

One person in the video is allegedly Giorgi Paresashvili, a journalist and civil activist, though he claims that it is a fabrication. Paresashvili has said that the video was posted only because he is in possession of compromising materials about certain officials in Ivanishvili’s government, among them Prime Minister Advisor Gia Khukhashvili, Deputy Interior Minister Gela Khvedelidze and Deputy Chief Prosecutor, Lasha Natsvlishvili.

He further claims that these three were involved in various illegal business ventures together with Natia Mogeladze, former chief of the State Audit.

All of the above mentioned officials deny any wrongdoing.