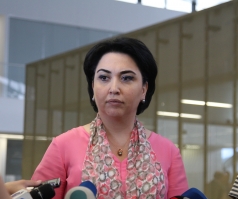 TBILISI, DFWatch–Two members of the Georgian parliament insulted each other on Thursday during a meeting of the human rights committee.

The committee was discussing the Public Defender’s annual report for 2013 when Chiora Taktakishvili from the National Movement called committee head Eka Beselia from the government coalition a ‘lawyer for the thieves’ and claimed that she is defending the interests of the Prosecutor’s Office in parliament.

Beselia demanded an apology, then called her opponent a ‘criminal’, ‘representative of torturers’ and ‘like-minded to murderers.’

Beselia also called the National Movement a ‘band of criminals’.

At that point, Taktakishvili stood up to leave the meeting room, but on the way out she switched off Beselia’s microphone as she passed by her table.

“This woman needs to be taken to a psychiatric clinic,” Beselia said.

It is not first time the two women argue during committee meetings. Their quarrels usually end with Taktakishvili leaving the room.