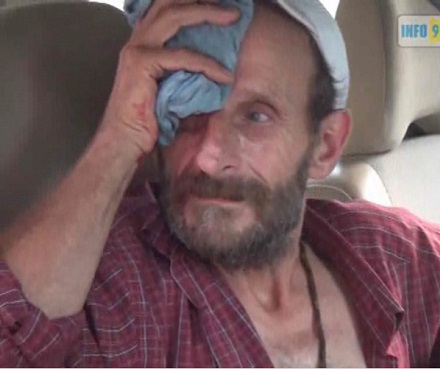 Cameraman for info9 Davit Chavleishvili was beaten by a local official in Lanchkhuti today, according to info9 and Guria News. (info9.)

TBILISI, DFWatch – A cameraman for an opposition affiliated media outlet was today beaten by a local employee of Lanchkhuti town. His camera was broken in the incident.

It happened while a journalist and a cameraman from info9 were standing outside the municipality building making a report about a transport of teachers bound for Batumi.

A man working for the municipality approached them, yelled that they must stop asking questions and get off the minibus. He then saw the cameraman and hit him. The camera was damaged and its owner Davit Chavleishvili received an injury to his forehead.

Info9 is an online news service with dozens of reporters posting videos and articles from all around Georgia.

info9’s journalist says that they were trying to find out where people in this buses were taken. A report shows that none of the passengers are willing to answer, but the journalist managed to find out that all of them were teachers and they were taken to Batumi, Georgia’s port city.

After the info9 team had been attacked and forced off the minibus, Lali Imedahsvili, a local journalist working for Guria News, tried to find out more about this incident. She asked questions to the regional governor, but he only said that he hadn’t witnessed the incident and “started laughing hysterically”, according to Imedashvili.

Davit Chavleishvili was brought to a hospital to take care of his injury. Later the info9 team went to the local police.

A few minutes after the incident, members of the National Movement party’s youth wing were also taken onto those minibuses, the Guria News journalist reports.

Lately it has become common to report that some officials are holding closed meetings with teachers or employees of public bodies and info9 suspected that this was another such meeting.