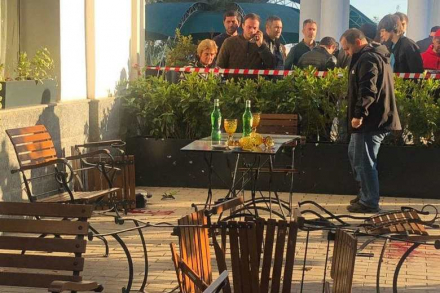 The perpetrators of deadly shooting in Sokhumi center are still at large despite efforts by the regime law enforcers who have blocked almost all roads and checkpoints in Georgia’s breakaway republic of Abkhazia.

At the same time, the de facto officials reveal the identity and possible motives of the crime. Two men, both 38 years old, who were killed during the shootout held the status of thief-in-law, highest rank in the criminal underworld of post-Soviet countries.

Earlier, it was reported that three people died during the shootout at San Remo restaurant on Sokhumi embankment. However, later local de facto authorities clarified that two men were killed and four others wounded in the restaurant terrace when the masked men opened fire from a car towards one of the tables with guests sitting there.

A young woman, the waitress, is still in the critical condition, de facto officials say.

An armed group of at least four men in masks and camouflage opened fire from Kalashnikov rifles on visitors of San Remo restaurant in Sokhumi on the afternoon of November 22, the de facto police said.

The two murdered men, Astamur Shamba and Alkhaz Avidzba, reportedly possessed “the title” of thief-in-law, which is the status of belonging to the underworld elite. This leads the de facto authorities to suspect the crime might be attested to the criminal infighting among different clans of Abkhazian mob.

The Enguri checkpoint which connects Abkhazia with the rest of Georgia is still closed by the regime.