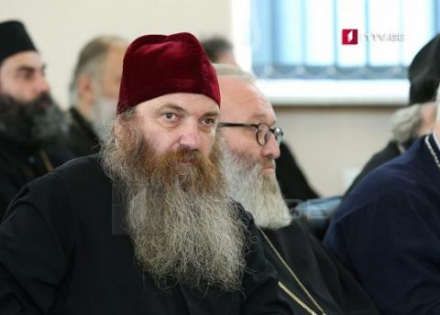 TBILISI, DFWatch–In Georgia, the government is embroiled in a scandal involving the Orthodox Church, after a bishop claimed the government tried to depose the highly respected Patriarch Ilia II.

Iakob, Archbishop of Bodbe Diocese, made the incendiary claim during an appearance on Pirveli TV on Saturday.

During the interview, the bishop, who is reportedly a former spiritual counsellor of Bidzina Ivanishvili, said he was invited to the office of then-PM Giorgi Kvirikashvili to discuss the removal of Ilia II, the head of the Georgian church and an extremely popular person in the country.

If this should happen, Patriarch Ilia II would be replaced by Metropolitan Shio, his appointed heir, Archbishop Iakob said.

Also present at the meeting were Giorgi Gakharia, then minister of internal affairs and currently prime minister, as well as Vakhtang Gomelauri, head of the State Security Service, the archbishop claimed during the interview with TV Pirveli.

All three categorically deny the accusations.

Although the archbishop doesn’t indicate the exact time of the meeting, it dates back to sometime between December 2015 and June of 2018, during Giorgi Kvirikashvili’s tenure as prime minister.

The statement has caused a public outcry in Georgia, with some downplaying its significance, pointing out that the archbishop seemed to be under the influence of alcohol during the interview.

On Monday, however, Archbishop Iakob repeated his claims while talking with journalists, adding that Giorgi Gakharia was the person most relentlessly insisting on the Patriarch’s replacement. Although apologizing for his ranting tone and incendiary language during the interview, he nevertheless stood by his previous statements about the meeting at the PM’s office.

Iakob Iakobashvili is the Archbishop of Bodbe Diocese. Until recently, he held the dual positions of the Patriarch’s Chorbishop and the Chair of Finance and Economic Council the Patriarchate, the governing body of the Georgian Orthodox Church. He said he resigned from both positions on Monday.

Clergy and government officials responded with anger and fiercely denied all allegations.

There is now talk within the Church of convening the Holy Synod to discuss the issue. The Synod is a convention of metropolitans and bishops and among its responsibilities is sanctioning high-ranking clerics.

The scandal surrounding Archbishop Iakob’s statements echoes a long-standing chasm in the Church between various groups who are trying to exert control over this popular and lucrative institution.

In November, 2017, Ilia II appointed Metropolitan Shio Mujiri as his potential heir. Although the Holy Synod has the final say in electing the next Catholicos-Patriarch, the move was assumed to be an expression of the will of the spiritual leader of the Georgian Orthodox Church, which it would be practically impossible to ignore.

The scandal has further marred the image of the Georgian Orthodox Church, which still struggles with the repercussions of the “cyanide affair”, a murder plot involving high-ranking clerics. Nevertheless, according to the latest opinion polls, the Church is still regarded by the public as most reliable institution in the country.