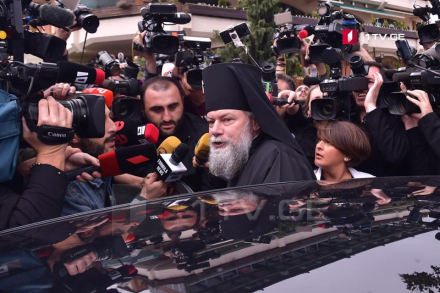 Petre Tsaava surrounded by journalists at the gates of Patriarchate where a session of the Holy Synod was held. (1tv.ge)

TBILISI, DFWatch–A session of the Holy Synod in Tbilisi has shocked the entire nation, as one of its members accused the spiritual leader and most popular person in the country, Catholicos-Patriarch Ilia II, of “pederasty”.

The accusation was so obscene and sudden that the dozens of journalists awaiting the results of the meeting outside of the gates of the Patriarchate, were literally taken aback.

Petre Tsaava, an outspoken Metropolitan of the important Chkondidi diocese in Megrelia, Western Georgia, said upon his exit from the Patriarchate that he’d been unfairly dismissed from his position after he “exposed the Synod chair of pederasty”. When asked whether he meant Ilia II, the Patriarch, he answered “yes”.

“[Metropolitan] Petre acted so indecently at the Holy Synod session that we had to [forcefully] remove him,” Metropolitan Nikoloz of Akhalkalaki said, commenting on the situation at the session.

He said the Holy Synod stripped Petre Tsaava of his diocese and advised him to redeem in a monastery.

Ilia II Shiolashvili, the Catholicos-Patriarch and spiritual leader of Georgian Orthodox Christians, is regarded as venerable and powerful. Even slight criticism of him sparks mass outcry and sometimes street protests in his support. Therefore, accusations of homosexuality in a very conservative country have shocked many Georgians.

In addition to its classical definition as a sexual relationship between an adult man and a pubescent or adolescent boy, in Georgian the term “pederasty” is used as an offensive term for gay people. When asked by Mtavari Channel what he literally meant, Petre Tsaava responded that he meant the former.

The incident has gone so far that even PM Giorgi Gakharia saw it necessary to comment.

“The Patriarch of Georgia is a symbol of the spirituality of our country, of our past, present and future. [Petre Tsaava’s statements are] absolutely unacceptable and I am sure that every citizen of our country will stand by our Patriarch today,” Giorgi Gakharia said during his trip to Turkey.

Ilia II called a session of the Holy Synod after Archbishop Iakob of Bodbe publicly blamed both the current and former prime ministers of Georgia had plotted to depose the Patriarch.

Archbishop Iakob’s claim was also discussed at the session but he managed to escape harsh punishment and retained his diocese.

The Holy Synod is the ruling body and highest authority in the Georgian Orthodox Church and consists of bishops.