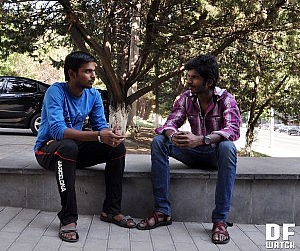 The two Indian friends Nirmal and Samy have been studying at the university for three years and are quite happy about their choice. They can’t think of any problems with living and studying here.

“We like this country and your people so much,” they tell us.

Professor Ia Avaliani, who chairs the Foreign Relations Department at TSMU, tells us that more than a thousand foreign students come every year from 38 countries around the world. Most of them take English courses, but there are also courses available in Russian and other languages.

Students mostly come from Asia, but there are from the Central America, Europe and Africa.

Usually, foreign students are accepted at Georgian state universities without having to take additional entrance exams, but TSMU i different in this regard. Here, it is required to pass a two-stage exam to be accepted. The exam is in biology, chemistry and English language and then there is an interview in English.

“Currenty, we accept one in ten applicants,” Avaliani tells us. He adds that the competition increases year by year.

University started accepting foreigners from 1998 for the faculty of medicine. Later other faculties like thhe pharmaceutical faculty, the physical medicine faculty and the rehabilitation and stomatology faculty were added.

Avaliani says prices for English language medical course is one of the most expensive in this region, but people still prefer to come here to study.

Still, the majority of foreigners are Indians. The first Indian students came in 2003. There was only five of them. It increased to 25, later 125 and by now there are 824 Indians studying at the Medical University.

“The salary of a doctor is very high in India. They study here. Go there to pass exam at Medical Board and if successfully passed they instantly get a good job there, so no one stays here,” Avaliani says, adding that students immediately leave upon completion of their studies.

Medical university, like other state universities, do not have its own dormitory, so the students usually rent apartments in nearby districts, which is inexpensive and easy to arrange.

Nirmal and Aravinoha Samy are renting a house with two of their friends on Delisi. None of them are looking for a job.

“We need time for studies,” they tell us, adding that parents are sending money for studying and living.

Prices for studying are pretty much the same in India. Nirmal explains that with flights and expenses it is still worth going to Georgia to study because the quality of studying is much better.

Samy’s brother and Nirmal’s sister are also studying here. That’s how they learned about the university and decided to come here. What usually happens is that relatives, friends and family members bring each other here.

Samy says it may be hard not studying in their native language at the Medicical Faculty, but they like it.

Both of them graduated medical school in India, so they had some basic knowledge before arriving, which made studying subjects on first course easier.

Samy and Nirmal plan to become cardiologists and hope to find a job in India as soon as they get back.

None of them like night clubs and bars, but prefer to spend spare time playing sports. They are in volleyball team of the university. Soon they plan to go to Batumi for a while and spend the rest of the holiday in India as usual.

For the three years they are in Georgia they never had any conflict with Georgian or other people.

Mariam, a Georgian student who studies at the Medical Faculty, says that foreigners and Georgians do not have any joined classes. They can meet each other at sports activities, but not many Georgians go to such activities.

“Foreigners prefer to spend time in sport. There are some Georgians too, but very few. I also don’t participate in sports activities,” she tells us.

She adds that she barely knows foreign students at the university.

Marian tells us she can’t remember any conflicts during her studies and that foreign students, especially Indians, are very peaceful and are always calm and keeping to themselves.

Apart from Indians, there are 217 students from Sri Lanka, 99 from Nigeria, 97 from Iraq, 34 from Turkey, 30 from Azerbaijan, 25 from Russia. Few students come from Australia, Austria, Germany, Spain, UK, US, Iran, Israel, Canada, Egypt, Fiji and other countries.