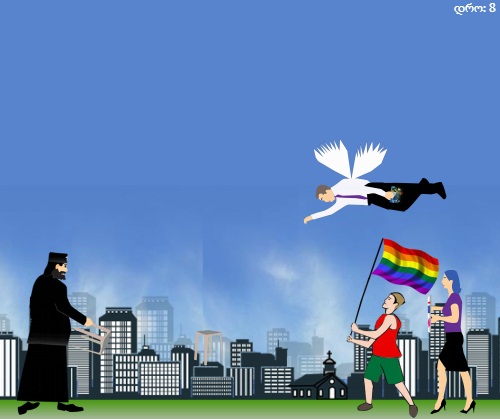 ‘Call of Taburetka’ lets the player be a priest who fends off gay rights activists using a stool.

TBILISI, DFWatch–A new Facebook game has become popular among Georgians. It emulates the violent incidents on May 17, when clerics took the lead in disrupting a demonstration against homophobia in Tbilisi.

The violence, which led to almost 30 persons being injured, inspired some people to create an online game for Facebook, whose object is to maneuver a priest along a street carrying a stool as a weapon to use against LGBT people and activists.

The new game is called Call of Taburetka, which means ‘call of the stool’ in Georgian. The priest holding the stool can run or fly and throw numerous stools against women and men carrying rainbow flags. The priest’s weak spot is his head. If he gets hit there by angels or others the game is over. The longer you survive, the more points you get.

Call of Taburetka has gone viral among Georgian users the last two days.