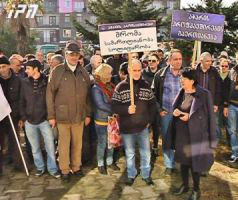 A new trade union for railway workers has been set up, headed by Vitaly Giorgadze and deputy Ilia Lezhava. They claim that the railway workers have difficult conditions. For example, they don’t have a canteen, shower, changing room, individual pharmaceutical boxes, or even soap and hot running water.

Trade union representatives and employees tried to negotiate with the heads of the railway to try to reach agreement on improving conditions and ways to solve the existing problems, but no consensus was achieved, especially when it comes to salaries, which employees consider the most important problem, so they went on strike.

What railway trade union members want is that since the railway belongs to the government, the next year’s budget bill must reflect the proper financing in order to determine new salary rules and a system for bonuses, and they think it is crucial to decide this issue right now, before the 2015 budget bill is passed.

On the background of the inflation, next year may be expected to make the situation worse for the families of railway workers.

The administration of Georgian Railway on Wednesday issued a statement saying that the goal of the employees who went on strike is just the goal of the union leaders and not a desire to solve the problem through dialogue.

The company says Georgian Railway is functioning normally and that most of the employees are not on strike, but only one group.

According to the statement 12,682 people are employed in the company and there are no interruptions in terms of freight movement or any other services. The company expressed hope that the part of employees who are on strike will follow the law and respect the rights of other workers who are not on strike and not violate their rights.

The company added that it has a new corporate social policy to improve the conditions of the employees.

However, trade union members claim that 60-70 percent of the workers are on strike. Among the strikers are drivers, conductors and technical personnel. They are gathered in Tbilisi, Samtredia, Kutaisi, Gurjaani, Gardabani and Zestaponi.

According to the statement by Georgian Railway, there were nine points in the list of demands from the strikers and they achieved agreement on seven of them, while one of the issues is a subject for the courts. Only on one point could the parties not agree.