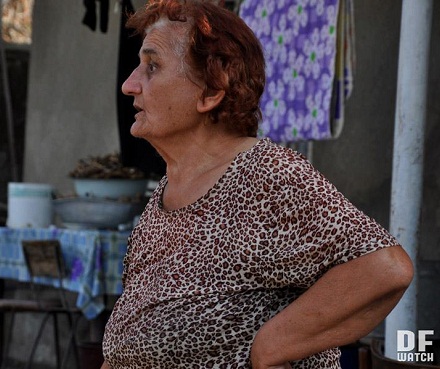 The storm in the east of Georgia Thursday was the worst in living memory. (Photo: Mari Nikuradze.)

GURJAANI, DFWatch – There are no windows left in the Salimov family house. Their bread bakery has collapsed together with the pantry. Everything that is wet has been taken outside in the sun to dry, while a giant walnut tree has fallen down and wrecked havoc in the yard.

Grandmother Meri broke her hand and can hardly walk. Now she is wondering how she and her daughter will be able to fix everything and turn the place into how it was before the storm.

July 19, a hail storm destroyed villages in Kakheti, a region in the east of Georgia. Roads were blocked, harvest destroyed, livestock killed, electricity cut, roofs blown off and some houses even collapsed, this is what much of Kakheti’s population now is having to face.

DF Watch visited the two villages Kalauri and Vachnadziani. These are the most heavily hit villages in the area around the town Gurjaani.

Traveling from Tbilisi there is a road of colorful lands and green trees; then suddenly you enter into a disaster area. In several villages, there is not a single leaf left on the trees, fruits are strewn on the ground, roofless houses.

Almost all the men in the families are on the roofs of their houses trying to fix it or cover it with pieces of tarpaulin which the local government has distributed to some families.

The rest of the family members are outside cleaning up the yard, clearing it of leaves and fallen trees, broken glass and other stuff the storm has thrown around. Electricity poles are lying on the ground; there is still no power in the village. The local government says power should be restored in a few days, but do not know exactly how long it will take.

Almost all the families in the street call us to come and look at what has happened to their houses. A man shows us a three storey house which is completely destroyed. No one was living there. He said he had prepared the house for his son, who is about to get married.

Meri Salimov broke her arm in the storm. Rescue workers had Friday not yet handed out tarpaulin to her family to cover the roof. (Photo: Mari Nikuradze.)

Salimovs’ family tells us they haven’t received tarpaulins yet.

“We were standing in line, but then they told us to go home and that they will bring it home to us. But what if they don’t manage today? What if there is another storm this night, heavy rain, or just plain rain?” one of them says, pointing to the roofless house. Inside, everything is wet.

The 75 year old grandmother in Berikashvilis’ family tells DF Watch for all her many years living in Kakheti, she cannot remember any such thing happening. Th families say the hail storm lasted just for fifteen minutes at night, but destroyed almost everything. Many people were taken to hospital with cuts from glass shards from the broken windows. After the area was peppered with large hail stones, there are no windows left in the houses, not a single leaf or piece of fruit on the trees.

Berikashvilis tell us how prefect their garden was, full of flowers, like the garden of Eden; now it’s more like hell. The tomato garden is fully destroyed.

“They promised us to restore our houses, but until they provide us with tarpaulin to keep the rain out. But yet we know nothing about our lost harvest and chicken.”

The roof of Berikashvilis’ house was not destroyed, but there are too many windows without glass. Just like the other families, they are afraid of more rain. A car from the local government arrives to assess the damages. When asked about the roof and told that roof is not damaged, they drive away, saying that they do not have time for families whose houses aren’t roofless. But they promise to come back sometime.

Meanwhile, a guy standing on top of the four storey building fixing something yells down to us asking if we are representing free media or not. Taking us up to the unfinished house Nikusha, shows us a 90-year old lime tree, which was proudly standing in this yard for years and suddenly almost nothing is left of the tree. The roof of this house has also disappeared.

He says soldiers didn’t help him to cover the roof or cut down the rest of the tree.

The streets are full of people dressed in military uniforms. They tell DF Watch they were ordered by the Interior Ministry to first help take care of fallen trees and help some families to cover their roofs with tarpaulin. They don’t know what will be the next order.

All the way from one village to another can be seen strips of fallen peaches. Red and yellow fruits are coloring the ground. Some of the families sell them to have bread money.

“We don’t know whether they will compensate for my bakery. I think we will now have to buy bread, but it was cheaper to bake it,” Mariam tells us. She says the local government promises to restore what’s damaged, but yet there is no talking about money compensation. They hope for the best. All fer 17 chickens died during the storm. 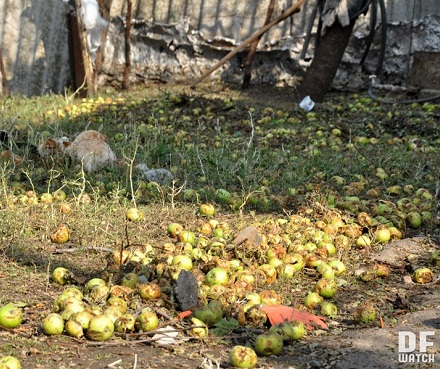 All the fruit had been strewn on the ground, and the Salimov family's 17 chickens had all died in the hail storm. (Photo: Mari Nikuradze.)

More than 1 500 people were affected by the storm. 22 were injured. The government has set up a special headquarters to handle the destruction, while opposition figure Bidzina Ivanishvili has offered to donate millions to help affected people, but it is still unknown whether the government will accept his help or not. There will be several categories of affected people, who will receive compensation amounting to 1 300-1 500, 800-900 or 300-500 lari.

Avtandil Silagadze, an economic expert tells DF Watch, that in case of natural disaster, the government is responsible for covering losses. This as the reason why there exists two crisis funds, one administered by the government and one by the president.

“What could be more important to spend this money on than cases like this?” he asks.

Very few have insurance in Georgia, especially among village farmers. None of the families we have visited have insurance nor have they ever considered getting it. Their reasons vary, some just don’t want to spend additional money on this, some don’t know what conditions apply, but no one has insured their harvest or their houses. So, now they are dependent on the goodwill of the government, the opposition or some organizations.

A survey recently showed that half of the population in Georgia is employed in the agriculture sector, and among them, the majority is self-employed. This means that they do not sell their harvest, but use it for subsistence. This is seen here in Kakheti – there are those who sell fruit and vegetables in the markets, and those who grow food in their yards and maybe sell it to neighbors.