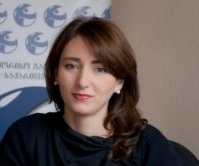 Eka Gigauri, head Transparency International Georgia, presented a new report which points out that there is a risk of President Saakashvili's government secretly spending money from the state budget for campaigning purposes. (IPN.)

TBILISI, DFWatch – A new report warns that the government may be using money from the state budget to affect the outcome of the election.

”The state budget is less defined. So there is a risk that the ruling party will use it for its own interests,” explained Eka Gigauri, head of Transparency International (TI) Georgia, as she presented the new report called ‘Transparent and Accountable Political Finance in Georgia’.

Nino Khatiskatsi, also working for TI Georgia, said that practice has shown over the last few years that public spending in an election year is more focused on social programs, short term employment and a populist agenda in general, compared to non-election years. This has also been the case in 2012, when there is a parliamentary election.

“The budget is not sufficiently detailed, therefore sometimes it’s difficult to understand how the money is spent. What is of particular concern in the expenditure of reserve funds,“ said Khatiskatsi.

The survey revealed cases of election motivated budget spending, including a summer student employment program, under which 25 000 students will be employed in selected organizations and each of them will get 500 lari.

The Ministry of Sports and Youth Affairs launched the project ‘Leader 2012’, where the students participated for free and they were trained in Anaklia, a city on the Black Sea coast.

“According to reports, this program was organized by the National Movement,” said Khatiskatsi.

She says most of the social initiatives started a few months before the October parliamentary election , which makes them think that these financial resources are being used for election purposes.

The whole reserve fund of the president and the government, 50 million lari each, are being spent during the first six months of the year. Afterwards, the funds are filled again.

“We suspect that the capacity of the funds exceeds two percent of the state budget, which is prescribed by law,” said Khatiskatsi.