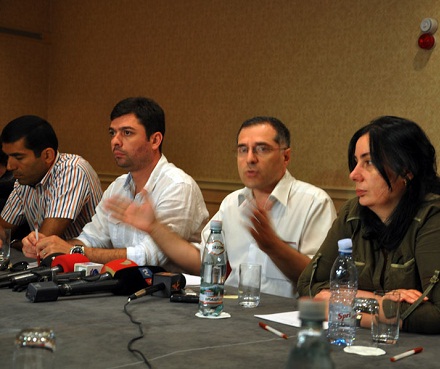 Having diverse information is important when elections are coming up, says Lasha Tughushi (center), editor of the daily Rezonansi. Nino Jangirashvili (right) says the campaign will continue until there are real results. (Photo: Mari Nikuradze.)

Directors and editors of media outlets consider that by seizing Maestro’s satellite dishes, authorities violated freedom of speech and the public’s right to receive diverse information.

During the meeting, plans were discussed to start a campaign in support of Maestro. The campaign will involve a rally in front of the old parliament building in Tbilisi, but also other events, including meetings with foreign diplomats and international organizations.

«The step taken by the prosecutor’s office together with the court contradicts democracy principles declared by Georgia and prevents people from making an informed choice in the upcoming parliamentary elections,” reads an appeal to the government and prosecutor’s office,

“We also note that it is completely unacceptable using state institutions against media, such as the prosecutor’s office and the court, especially when it is done for political reasons.”

A week ago, the prosecutor’s office seized thousands of satellite dishes belonging to Maestro TV, out of an argument that the TV company was planning to bribe voters in favor of the opposition Georgian Dream coalition by distributing satellite dishes to the population for free. https://dfwatch.net/maestro-journalists-defend-tv-stations-integrity-28949 Tbilisi City Court almost immediately approved the prosecutor’s request.

But representatives of Maestro say the plan to hand out satellite receivers was just part of a new marketing push called ‘Maestro in Every Family’, with the aim of increasing the number of viewers this summer.

“We cannot take away kindness from people, especially when elections are coming up, and having diverse information is very important,” says Lasha Tughushi, editor of the daily Rezonansi. He hopes that through concerted action, the campaign they will manage to have the seized satellite dishes returned to Maestro.

“We won’t stop a multitide of activities until we see real results, because this is a very principal issue for us,” Nino Jangirashvili from Kavkasia TV said today on the meeting.

Shorena Shaverdashvili, editor of Liberali magazine, considers the recent actions an intervention into the activity of the media, an attempt to restrict the dissemination of information, which is so important during this period before the parliamentary elections.