How can minority women get into politics in Georgia?

How can minority women get into politics in Georgia? 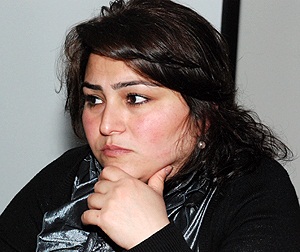 TBILISI, DFWatch–Sabina Talibova is an ethnic Azerbaijanian living in Marneuli. Some time ago, she became involved in several non-governmental organizations which are working to engage women more in employment and politics.

DF Watch talked to her about problems people in Marneuli are facing now and problems that appeared after the Russia-Georgia war in 2008.

Do people here, especially minorities, want to be members of the local government?

Yes they do. I have two women with whom I am working now. I can’t say what their chances are, because we are competing against men. One is Nargiz Mamedova in Aghamedlo, another Humai Abdulaeva in Sadakhlo. We included Nargiz in a project aimed at training women politicians. Next month, Humai will attend such a training in Tbilisi. Our women need support, but also financing. Men usually have means. When I say competing against men, I don’t mean only money, but corruption as well. Corruption exists here, but it is completely hidden. We know this, but we don’t have any evidence, because those who give and receive bribes manage to keep it in secret. We would have been really happy if an honest man would get into the local government. But such people are few. I know only one.

Do the parties in parliament or the non-parliamentary opposition contact the local population in Marneuli municipality?

Yes. Earlier there were organized meetings with party representatives. They weren’t against women attending such meetings and said they would welcome us in their party with great pleasure. But we have a request that at least one woman presented by us would make it not to the top ten on the list, but at least the top three; so that at least one of our women candidates had a chance to achieve success in any party. If we don’t like the conditions in the party we prefer to avoid it, unless there comes a party which has good conditions.

UNM used to be active earlier, but we don’t trust them so much. They have two representatives, one Georgian and one Azerbaijani here, but we haven’t even met them at a single meeting here. We haven’t witnessed their civil or political activism. One is a teacher, another one is a pediatrician, and they are busy with their professions. They only have status as MPs. UNM used women as a facade. Georgian Dream has a chance to gain trust before the upcoming election or lose it. As you are aware, people in the regions mostly support government forces. 40 percent supported Georgian Dream in the parliamentary election. Do you know why? Because people wanted changes; but the people who supported Georgian Dream are now disappointed, because they wanted changes but things got worse than they were before. Other parties are less active.

Do UNM or Georgian Dream work to get women engaged in civil activism, what strategies or policies do they have?

The main areas are gender, social engagement and health care. However, we cannot speak about the UNM and gender, because there are only two women here in our region from them. They started social programs as well, but they were conducted dishonestly. There exists a social program now. They support women with specifically women diseases, but only these; no other diseases. There have been exceptions, but this need collecting tons of documents, contacting various bodies – and time. The procedure is not good, but the program works.

I, as a citizen, expect political force which would strengthen local governments, which is fundament to great politics.

Nino Burjanadze was able to perfectly work with women, but she is pro-Russian and the majority of our population prefer Western orientation. We could cooperate with her in regard to women and development issues, but we might not have been able to agree on political issues. I respect her as a woman. She is a very strong person; however since she has 100 percent pro-Russian. This is unacceptable for us.

Still it would have been good if they could manage to get a slight percentage of votes in our region and hold some seats in the local government here.

What are the problems which appeared in Marneuli after the war in August 2008?

There have been problems before the August 2008 war which haven’t gone away, but the new problem was fear. Statues, buildings were destroyed. The level of life didn’t became lower after the bombing, only the runway was bombed during the war, not villages. However, there still was a fear.

The Georgia-Armenia border is close to us. There still is no demarcation between those two countries. and back then there was a feeling of being unprotected; locals felt a threat. No border guards protected the border. Afterward, only two guards were placed at the border. We still don’t have border checkpoints, only two border guards, per shift, from our side. This is terrible. However it is better than it was before. We don’t have checkpoints, military arms, which we could have in order to resist a neighboring country. The armed forces were Russians, but their soldiers were in Armenia too.

There was a fear and distrust of the government, because the war started before August. In May I used to work on a report to monitor the situation at the border that year. The situation was very difficult, because border guards used to detain people for violating the state border. Then we used to demand to return detainees back after mediation by the Georgian Interior Ministry. By the way, even this year one person was detained in Armenia for two and half months and was released only after the ombudsmen of Armenia and Georgia got involved in the case. This person is from Sadakhlo, Alakhverdi Palangevi.

The standard of living is lower, because people have lower income. They have stopped construction work, thinking that war will start again and first the object of attack would be the border zone. People began to leave, mainly going to Azerbaijan in order to send money to those who are left here.

People asked me to contact the government and tell them that if they weren’t planning to have a checkpoint, they could arm the population so they would are able to defend and respond to an attack at least for a while, until the armed forces come to help.

The problem is that the government didn’t respond and didn’t take any measures for the security of citizens. It was a complete misunderstanding and a sense that no-one needed us and we were left here alone.

As for the city itself, certain investments were planned, especially from Azerbaijan. There was one project to construct a branch of an Azerbaijani bank here. One branch is in Tbilisi and another one was planned in Marneuli.

In addition, the health care center of Azerbaijan planned to build hospitals here. There is a hospital chain in Azerbaijan which is free. Even though I am a citizen of Georgia, they did an operation on me completely free. There are many such facilities in Azerbaijan and we knew that they wanted to construct them in Georgia too. The war interrupted this process.