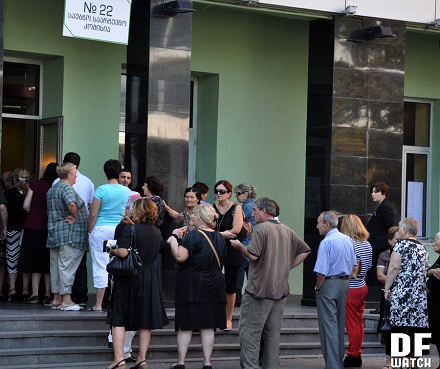 High voter turnout. By noon, more than a quarter of the 3.6 million eligible voters had cast their vote, according the the Central Election Commission. (DFWatch photo.)

TBILISI, DFWatch – In Georgia the most important election in recent history is underway.

According to the Central Election Commission, there was a 25.5 voter turnout by 12:00. There have already been reports of violations.

Many see the parliamentary election as a test of the level of democracy.

In addition, the country will go through a constitutional change in 2013, from a presidential republic to a system where power rests in the parliament and government. Following the change, the new parliament will be the primary source of power, which will elect a prime minister, whose authority will significantly increase with the new constitution.

The current election is the greatest challenge President Mikheil Saakashvili has ever faced, as a strong political player appeared in the political arena at the end of 2011.

Two election blocs and 14 political parties participate in today’s election. Parliament is elected for four years and has 150 seats. 73 of them are elected on the basis of the majoritarian (first past the post) system, the rest by a proportional system.

Crowds are observed at different precincts in the capital and some other cities.

The outcome is uncertain. In recent months, polls done by local and international organizations have varied wildly, and last week, revelations of torture in the prisons may have damaged the government’s chances.