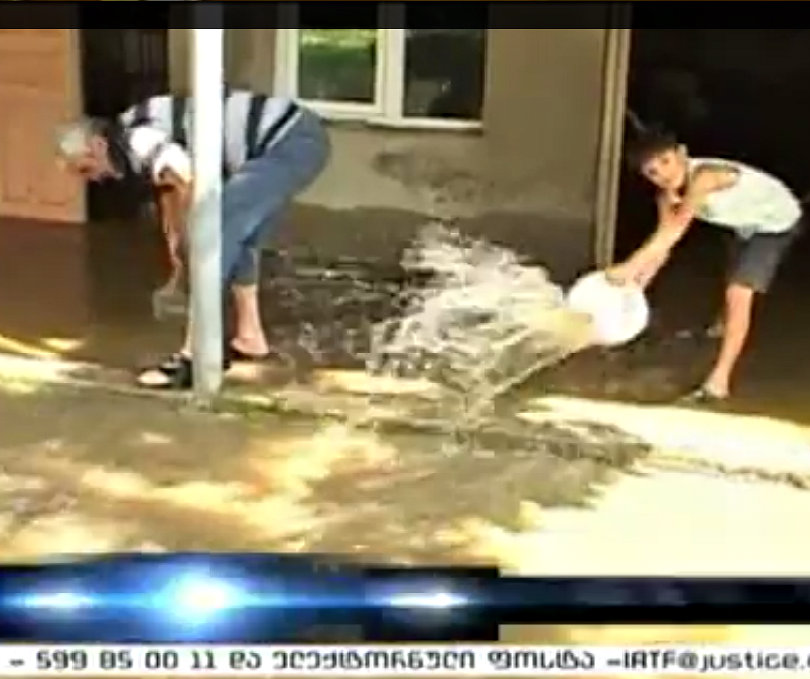 People in Khoni were up since 4 am Friday removing water from their homes. (tv9.ge.)

TBILISI, DFWatch–Rain water poured into the village Khoni in western Georgia Friday, flooding the basements and first floors of 500 houses and killing poultry.

Locals tell journalists they haven’t slept all night but have been out cleaning their houses and saving their belongings since 4 in the morning.

The asphalt was under water, also first floors and garages, they say.

Zurab Jibukhia, head of the local government in Khoni, in the Imereti region, says people living in both mountainous and lower areas are affected.

“Domestic roads are flooded. Traffic is nearly paralyzed and people find it hard to drive,” he said on Friday, the morning after the flood.

Jibukhia added that a commission has been created at the local government to assess losses to prepare for the compensation process.

Electricity is switched off for safety reasons.

“Fortunately, the rain stopped in the morning and families are assisted in removing water,” Jibukhia said. “I can still not say what extent of damage has been done to our city by the flood.”

In recent weeks, several regions have had floods and tens of villages have been affected by heavy rain. Last week, Ozurgeti in the western Guria region was hit. Before that it was Senaki in the Samegrelo region. Black Sea coast regions were flooded in late July. So was Pshavi, in the north of Georgia.