Head of Georgia’s National Bank gets backing from EBRD president

Head of Georgia’s National Bank gets backing from EBRD president 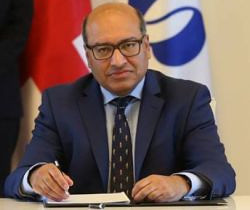 TBILISI, DFWatch–The head of the European Bank for Reconstruction and Development (EBRD) commends the head of the National Bank for conducting an exemplary monetary policy. The Georgian lari has tanked in recent months.

The lari has gone down more than 30 percent since November.

The godfather of the government, businessman Bidzina Ivanishvili, has blamed the president of the National Bank, Giorgi Kadagidze, for not intervening enough to keep the lari stable, and has implied that it is a form of deliberate inaction.

Kadagidze was appointed by the former National Movement government, which has seized on the currency crisis to criticize the government for what it sees as incompetence in economic policy.

Georgian lari went down from from a level of 1.75 against the US dollar in November, 2014, to now 2.3429 GEL against the dollar, according to official rates published by the National Bank.

The National Bank’s monetary policy is to maintain inflation targets, not to keep the exchange rate stable.

EBRD President Chakrabarti, who is visiting Georgia in connection with the bank’s annual business conference, said yesterday after meeting with Kadagidze that he fully supports such a monetary policy, and the policy of keeping monetary reserves.

According to Chakrabarti, the National Bank’s policy is an example for other countries. According to him, it is wise to maintain a floating exchange rate. He congratulated Kadagidze with being named “central banker of the year” by the British monthly journal “The Banker” in January. Among the selection criteria was stability and sustainability of the banking sector.

EBRD has spent more than EUR 2 billion in Georgia for implementation of various projects.

Meanwhile Kadagidze told journalists on Tuesday that he doesn’t plan to comment about the lari rate until next week, as this week there are events planned for the visit of the EBRD delegation and the country has to present its investment potential at its best.

He also said that next week he will be in parliament, where he will address the lari rate issue. Finance Minister Nodar Khaduri refuses to say whether the government has a plan to deal with the crisis but says he counts on the annual report of EBRD to stop the devaluation of the lari.

Roman Gotsiridze, head of the non-governmental organization Economic Development Center, told DF Watch that the crisis is much deeper than what can be solved at the events and meetings at the EBRD’s annual conference, which is taking place in Tbilisi these days.