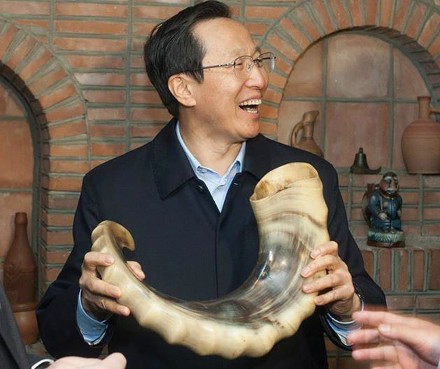 TBILISI, DFWatch–China has gifted 245 units of tractors and other machinery to Georgia. The hardware, which also includes bulldozers, excavators, trucks and off-road vehicles, is worth about USD 10 million.

Accepting this gift from one of Georgia’s top trading partners, Prime Minister Irakli Garibashvili expressed gratitude to the People’s Republic of China for helping to develop and accelerate the overhaul of irrigation and wastewater treatment facilities.

He also said that the two states have signed a deal which involves the construction of more than 30 warehouses for vegetables in Georgia.

“Georgia is given the opportunity to fulfill its historic function and become the shortest connecting corridor between Europe and Asia,” Garibashvili said on Tuesday.

Particular attention was paid to Georgian wine. According to the Ministry of Agriculture, export of Georgian wine to China was more than 66 percent higher in January-February this year compared to 2014.

Han Changfu said Georgian wine has a ‘huge potential,’ not only on China but throughout the world.