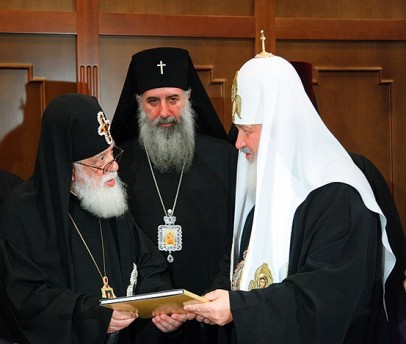 Tbilisi, DFWatch – The head of Georgian Church  is expected to pay a visit to Moscow in November to attend a 70-year jubilee of his Russian counterpart.

According to the Patriarchate of Georgia,  Catholikos-Patriarch Ilia II was invited by the Patriarch Kirill of Moscow and All Russia to celebrate his 70th jubilee on November 20.

The 83-year-old patriarch is also expected to visit a Georgian Orthodox church in Moscow and to meet with the representatives of the Georgian community during his November 18-23 trip to Russia.

Since August 2008 when following a brief war with Russia Georgia has suspended diplomatic relations with its northern neighbour, Catholicos-Patriarch Ilia II is the only the highest ranking Georgian dignitary, who has kept ties with Russia. He even met President Vladimir Putin in one occasion in Jan, 2013.