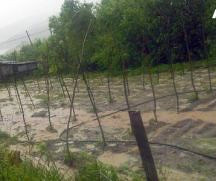 More than ten villages were affected nearby Gori, in the Shida Kartli region. Agricultural lands were flooded, while gravel blocked the roads leading to smaller villages.

The vicinity of Shavshvebi was also flooded, where there are several refugee camps for people who fled from South Ossetia.

Government committees are now assessing the damage in affected villages. Local governments promise to reimburse the losses suffered due to the storm.

Meanwhile, a number of districts in Tbilisi are left without running water. Georgian Water and Power, the company which supplies the capital, said in a statement Sunday that flood water from the river Aragvi is causing problems at the company’s main buildings, which is why normal supply of water was interrupted and several districts were left with no water for the whole day.