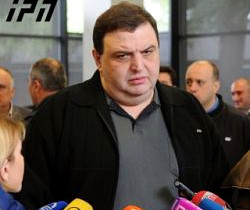 Sanikidze has been one of the party’s most active representatives and has been a member for ten years.

He said at a briefing that he will remain in politics despite leaving the party.

“I decided to leave the National Forum, but will continue being in politics and will help forming a great opposition movement. You will soon learn what and how things may happen. I need time for consultations,” he said.

Sanikidze said that he is in negotiations, but didn’t specify with whom, beyond stating that he will not cooperate with Georgian Dream or the National Movement.

“There are exceptional people in Georgian politics like Nino Burjanadze and Davit Usupashvili,” he said.

Former parliament speaker and leader of Democratic Movement Nino Burjanadze told Channel 1 that her party has negotiations with Sanikidze, but no decision has been made so far. But she made it clear that it would be a pleasure for her to cooperate with him.

Usupashvili, the other name Sanikidze mentioned,  recently stepped down as leader of the Republicans and left the party together with his wife, former Defense Minister Tina Khidasheli, the reason being that the party failed to surpass the minimum five percent in the election and is out of parliament for the next four years.

Several members of the Free Democrats also left the party after it also failed to reach the minimum threshold.

The same fate befell Sanikidze’s National Forum, after it too decided to try to run independently in the election, after coming into parliament as part of the Georgian Dream coalition in October 2012.

Sanikidze believes that the opposition made mistakes in this election.

“I have a strong political motivation, and I think that the opposition spectrum has a difficult job to do. I will actively participate in carrying this out.”

Shortly after the final results of the election became known, Usupashvili left the Republican Party with his wife.