Germany thanks Georgian soldiers for helping repel attack on consulate

Germany thanks Georgian soldiers for helping repel attack on consulate 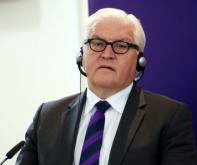 TBILISI, DFWatch–Germany thanked Afghan and Georgian forces on Friday for repelling an attack on a German consulate in northern Afghanistan the day before.

The attack on the consulate in Mazar-e-Sharif ended as the attackers were pushed back by consulate security, Afghan security forces and special forces from the Resolute Support mission from Camp Marmal, according to a statement issued by the Federal Foreign Office of Germany.

“We are particularly grateful to the Afghan security forces and the Georgian forces from Resolute Support who courageously, professionally and immediately rushed to help and thwarted the attack,” the statement reads.

It is still unknown how many Afghan civilians and security personnel were killed or injured as a result of the attack, but according to the Foreign Office, all German staff at the consulate are safe.

“There has been substantial damage to the Consulate-General building,” the statement says. “Our thoughts are with the Afghans who have been injured and with the families of the victims.”

Georgia is one of the biggest contributors to the NATO-led Resolute Support Mission. The number of troops is currently at 870.