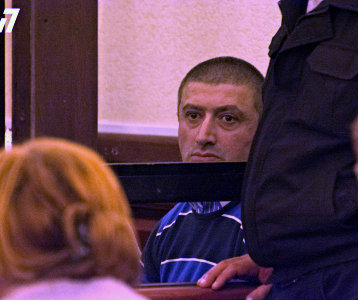 TBILISI, DFWatch–A former head of shift of Zurab Zhvania’s security detail, who was detained in the new investigation into the prime minister’s death in 2005, was Sunday released from preliminary detention on a 2,000 lari bail (nearly USD 1,090).

Prime Minister Zurab Zhvania was found dead in an apartment in Tbilisi on February 3, 2005. The Saakashvili government quickly announced the cause of death as accidental gas poisoning, but the case has remained controversial and it is a widely held view that Zhvania was in fact killed.

After Saakashvili lost government power in 2012, the case was reopened, and it was in connection with this new investigation that Mikheil Dzadzamia was detained  March 21, 2014, charged with negligence leading to death.

As head of shift of the PM’s security guards, Dzadzamia should have been with former Prime Minister Zurab Zhvania on the day when he died, February 3, 2005. Violating section 342, part two, of the Criminal Code, about negligence in official duty leading to death, can be punished with up to four years in jail.

Dzadzamia’s lawyer Gela Kenkadze told journalists that on December 14 the Prosecutor’s Office made a motion to change his client’s pre-trial detention into 10,000 lari bail, but the lawyer didn’t agree with this and the judge Eka Areshidze agreed to release Dzadzamia for 2,000 lari.

The Prosecutor’s Office’s reason for asking that the defendant be given bail was that he had been in pre-trial detention for almost the maximum duration of 9 months.

Dzadzamia asked for a jury trial, but the process of selecting a jury was delayed. According to the Prosecutor’s Office, the process of selecting a jury is a long and complicated process and would prevent a timely start of the trial. Only 40 percent of candidates came to the selection session, which is a small pool to select from. Even though three months have passed since the pre-trial hearing, only one jury member has been selected so far. One more needs to be selected, and since nine months has passed, the Prosecutor’s Office asked to release the detainee on bail.

Another man, Levan Chachua, who participated in the autopsy of Zhvania’s body in 2005, was also detained for negligence and was also released in November on a 10,000 lari bail. Chachua was detained on March 20.