Groups want independent inquest into destruction of ancient gold mine

Groups want independent inquest into destruction of ancient gold mine 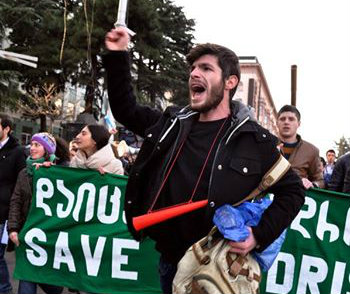 TBILISI, DFWatch–Non-governmental organizations in Georgia demand an inquest into how an important archaeological site was almost completely destroyed by a mining company a few days ago.

The 5,400 years old gold mine in Sakdrisi was mostly destroyed by the company RMG Gold after the Culture Ministry revoked the area’s cultural heritage status.

Youth activists demonstrated at Tbilisi State University today and demanded a stop in the mining work in Sakdrisi and to restore the site’s cultural heritage status.

Thursday, NGOs launched a petition addressed to Speaker of Parliament Davit Usupashvili asking for an independent investigation to be started immediately. They underline that by a Tbilisi City Court ruling, RMG Gold still doesn’t have permission to carry out large scale work at the Sakdrisi site, which lies in the southern part of Georgia, and therefore the company is in gross violation of law when it now proceeds with open-cast mining using explosives.

Referring to a battle between experts siding with the government and others who argue for protection, the petition reads that according to a statement by Georgia’s National Museum, based on a recent study carried out in compliance with international standards, Sakdrisi is an archeological site which has global importance, but Georgia’s Cultural Heritage Protection Agency removed all responsibility about this issue.

The organizations say it’s impossible to have trust in law enforcement agencies in this issue, since the destruction since December 13 took place under police supervision.

Among the signatory organizations are Georgian Young Lawyer’s Association, Institute for Development of Freedom of Information, Green Alternative and Tiflis Hamkari.

Archeologists have found more than 5,400 year old traces of humans at Sakdrisi and called for it to be protected.