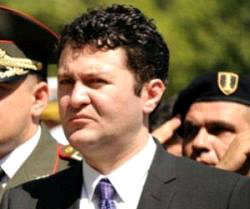 Tbilisi, DFWatch – The Greek Supreme Court has upheld a decision by a lower court to reject an extradition request for Data Akhalaia, a former head of Georgia’s domestic intelligence agency.

The Supreme Court agreed with the decision by the Appeals Court in Patras.

Akhalaia’s lawyer claims the Supreme Court explained that Akhalaia is subject of political persecution and that the charges against him are illegal.

But the Georgian Prosecutor General’s Office claims the court didn’t consider the charges, as this is not necessary under international treaties regulating extradition requests between Georgia and Greece.

Data Akhalaia is brother of Bacho and son of Roland; three persons who were all close allies of former President Saakashvili and held the Megrelian region in an iron grip through its informal clan based rule.

There are also charges against him in the case about the murder of Sandro Girgvliani and another torture case called the Navtlukhi special operation.

Interpol has issued a Red Alert asking for the detention and possible extradition of Data Akhalaia.