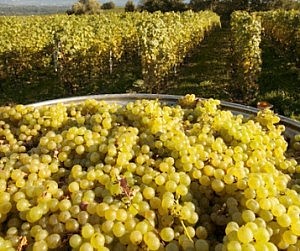 More than 1,850 tons of rkatsiteli grape and more than 1,110 tons of saperavi has been processed in Dedoplistskaro.

Some winegrowers are unhappy with the prices and think they are too low, especially the rkatsiteli price. Locals from the village Chandari say they think one kilo should cost at least one lari.

Some of them told the newspaper Rezonansi that with the government subsidy it won’t be that hard for them to sell the harvest.

“I cannot be dissatisfied. That would be ungrateful of me. Even if they help us with five tetris, it is a gift from the government and we have to value it,” winegrower Otar Berdzenishvili says, adding that 45 tetris is not a small subsidy, but the rkatsiteli price is lower than last year.

Minister of Agriculture Otar Danelia August 24 opened a headquarters in Telavi to coordinate the grape harvest and announced this year’s government subsidies. He said that in Racha-Lechkhumi and Kvemo-Svaneti, the subsidy will be 2 laris for Mujuretuli-Aleksandrouli grapes.

Before 2015, the government distributed the subsidy to the companies, but this will be the second year the government subsidy is given to the winegrowers.

The amount of subsidy has increased compared to last year. In 2015, one kilo tkatsiteli and mtsvane was 35 tetris, while one kilo saperavi was subsidized by 15 tetris.

The government spent at least 30 million laris to subsidize the harvest in 2015. Winegrowers had an income of more than 102 million laris.

National Wine Agency Head Giorgi Samanishvili said the grape harvest this year is smaller than last year, and the reason is powdery mildew, but the harvest was mostly saved and the quality is good.

125 companies will be involved in grape processing this year, according to him.