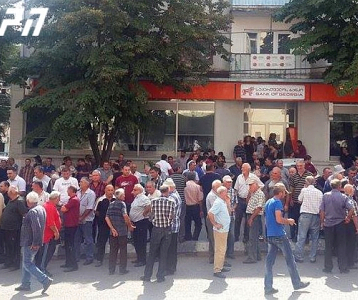 TBILISI, DFWatch–Farmers continued their protest in the Georgian wine region Kakheti on Monday and clashed with police as they blocked the main highway.

Several people were detained by police as they cleared the road. One member of parliament was attacked.

The farmers are still not satisfied with the grape prices they are offered by processing plants, and blocked the Telavi-Tbilisi highway, as they did a few days ago.

One person attacked Giorgi Ghviniashvili, a member of parliament for the National Movement, representing Gurjaani.

Gviniashvili told media that the attack happened after the prime minister called on police to control the situation and ‘get rid of’ provocative people. There were grape-related protests throughout the day with a political angle.

Irakli Garibashivli said Monday that the former ruling National Movement party is engaging in provocations at the protest which he said are ‘directed against the state.’ He said MP Ghviniashvili, who has been governor of Kakheti, for years ordered wine companies not to buy grapes from farmers for a high price and the previous government didn’t have any subsidies for grapes, but today the ex-governor has become very supportive toward farmers.

He concluded by saying that further tension in Kakheti is staged by the National Movement.

“With 20-30 people and intrigue methods UNM is provoking to worsen a very positive picture of vintage,” he said, adding that farmers have 100 percent benefit because the price of grapes is about 30-35 tetris and companies buy it for 70 tetris.

One kilogram of white grapes is accepted for 60 tetris and red grapes for 85 tetris.

Earlier on Monday morning, MP Ghviniashivli said during the rally that the government is not active in helping the farmers.

The governor of Kakheti, Irakli Shiolashvili, said as he met farmers that the price on wine won’t increase. The UNM is actively involved in planning farmer’s rally, he added.

According to the most recent data from the Georgian Wine Agency, 7.1 tons of grapes had been processed in Kakheti by September 14. This includes produce from villages in the vicinity of Gurjaani, Lagodekhi and Telavi. 21 wine producing companies are currently active in Kakheti, six are hired by the government.