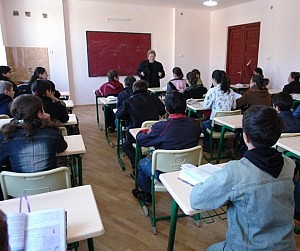 TBILISI, DFWatch–Georgia’s education ministry has postponed the start of a new school subject as conservatives criticize it for eroding traditional values.

Some were expecting the subject called ‘society and me’ to be taught in schools from the beginning of the 2015 fall semester.

‘Society and me’ will be taught in third and fourth grade and not be compulsory, the ministry said August 17. It will aim at raising awareness among pupils about family, school and community, including issues like security, healthy lifestyle, violence issues, tolerance, development of social skills and environmental protection.

Some groups didn’t like the idea of the subject. An iconic person among radical religious people or those praising traditions, Levan Vasadze, who formally has status as ‘knight’ and is president of the Demographic Development Fund, expressed displeasure about ‘Society and me’, claiming that the subject will cause ‘irreversible deformation of the psyche of the younger generation.’

“Instead of protecting the strength of the family and moral values, they teach children from an early age diversity, gender equality and tolerance toward all forms of difference, publicity of family conflicts and uses methods of role playing,” he said a few days ago, adding that the goal to teach this subject in schools is to confront cultural, ethnic and religious features under the mask of diversity and tolerance.

The Ministry of Education two days ago said the subject will not be taught in schools because it is still being processed. Textbooks still need to be printed and the program of the subject needs to be finalized, which will take time. So far it is unknown when the subject will begin being taught in schools, but some people thought the reason for the postponement was resistance from particular groups in society; a notion the ministry rejected.

A spokesperson for the ministry said they have been working for two years on bringing this new subject into schools and holding consultations with public schools, high schools, education experts, non-governmental organizations and the Georgian Orthodox Church.