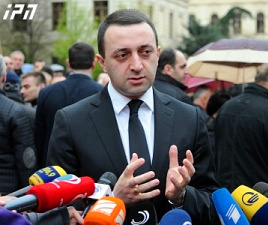 TBILISI, DFWatch–After a man suspected of killing two policemen evaded arrest for almost a week, Georgia’s prime minister says that government will be ‘ruthless toward crime’.

The announcement came after several law-enforcement ministers have talked about tougher measures against criminals.

The government first said it would increase police powers, but didn’t specify in what way. On Thursday PM Irakli Garibashvili and Defense Minister Janelidze said the government is planning a ‘ruthless’ policy toward crime.

Increased police powers and a ‘ruthless’ fight against crime were two of the policies of ex-President Mikheil Saakashvili which the opposition criticized him for.

Saakashvili also introduced a ‘zero tolerance’ policy towards crime a few years into his presidency.

An important consequence of these two policies was that human rights were massively violated, by the government’s own volition, as protecting human rights was seen as secondary to breaking the mafia’s back.

The ruthless policy was criticized by the opposition at the time, especially because increased police powers seemed to be more a tool for the Saakashvili regime to cling on to power, than a weapon to fight crime.

The number of prisoners grew out of control while prison staffing was cut, leading to worsening conditions in prisons. When the new government came in, they promised to reverse that policy, and one of the first things it did was to introduce a mass amnesty which led to the release of over half of all prisoners.

But despite criticizing the increased police powers while in opposition, the parties that now are called Georgian Dream did nothing to reduce police powers when they came into government.

Also, they have left the police more to themselves, not offering as much support from the top as Saakashvili did. A recent poll showed that the police now have less influence in society.

Deputy Interior Minister Levan Izoria on Monday made his first statement about increasing police powers and the necessity of preparing a draft bill about this.

It is also unclear what Garibashvili meant exactly by being ‘ruthless’ to crime.

The prime minister mentioned prisoners released in the mass amnesty in his statement.

“Everyone who didn’t appreciate a humane step taken by the government, will go back to jail.”

He said the interior minister has been given instructions about this issue, but wa not clear as to how those people will be sent back to jail.

Spokespersons for Saakashvili’s party, the National Movement, think it is a consequence of incorrect policy that the government now has that make such statements. Unlike the Free Democrats, National Movement thinks it was a mistake to have a mass amnesty.

Human right activists think the Prime Minister’s statement is risky, as it is vague about what instructions he has given law enforcement bodies. Specialists say that Garibashvili partly admitted mistakes were made during the amnesty.

Georgian Dream members do not think that the PM’s statement means declaring a ‘zero tolerance’ policy to crime.

Eka Beselia, head of the Human Rights Committee in parliament and co-author of the amnesty law, explained that the PM was referring to the law which strictly punishes repeated crime. Beselia still rejected that any mistakes were made when the amnesty law was passed.