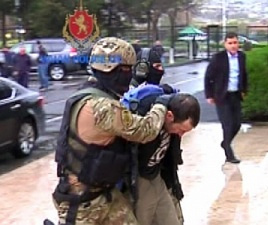 TBILISI, DFWatch–The suspect in the murder of two policemen, who was subject to a search by not only the police, but also counterintelligence, was apprehended near his hometown in an abandoned house on Friday.

The Interior Ministry confirmed this on Friday.

The operation took place this morning 150kms from the capital in the resort town Borjomi.

According to the MIA, suspect Shalva Abuladze was found in an abandoned house which belongs to his family.

The ministry also informs that two guns and one grenade was discovered in the house where Abuladze was hiding. He was taken to Tbilisi by helicopter. He has no injuries. Criminal investigators are continuing to examine the crime scene.

Abuladze is charged with murdering two policemen. He has been wanted by police for four months, according to Maestro TV.

The most recent incident took place on April 4 in Varketili, south Tbilisi. Two policemen stopped him to check his identity when he opened fire.

One officer, Beka Margishvili, died, while the other Valerian Grdzelishvili was injured and remains in hospital.

The previous murder took place in Borjomi on January 23. One policeman died and another one was injured.

The case has caused massive public interest, and three branches of law enforcement, inluding intelligence, have been involved in the search, which lasted almost a week.

Abuladze has a long criminal record. His most recent prison sentence was reduced with one quarter in the 2013 mass amnesty and in November 2013 he left prison. 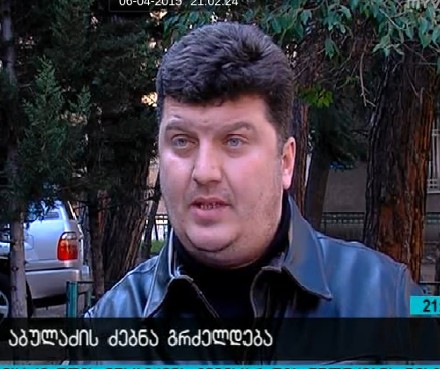 Authorities and some of the media have been fast to rule out any rational motive. Head of parliament’s defense and security committee Irakli Sesiashvili compared the April 4 shooting to the Norwegian terrorist Anders Behring Breivik’s attack in 2011.

But in Tbilisi’s sometimes over-the-top tabloid press, there has been much speculation about why Abuladze would twice shoot at police.

Also television channel Maestro explored possible motives, and showed interviews with many of Abuladze’s friends and neighbors in his hometown Borjomi, who don’t believe the version of events they have heard from officials.

One of those who doubt the official version is member of Borjomi municipal council, Davit Roketishvili, a friend of the killer, who was interviewed by Maestro TV.

The television channel also interviewed journalist Dito Chubinidze in the newspaper Asaval-Dasaval, who knows Abuladze and has often used him as a source for his articles.

Chubinidze claimed the murder suspect was subject to a plot organized by Mamuka Khazaradze, head of TBC Bank.

He says the suspect was subject to threats that began after he participated in a demonstration against Borjomi, the mineral water factory, in October 2014. The demonstration featured a street theater stunt with an enactment of a funeral involving a coffin and flowers.

Chubinidze claims it was after this protest that the problems started for the murder suspect. Head of police in Borjomi made false rape charges against the now detained Abuladze. The rape charges then made the whole village turn against that one man and there began a manhunt for him. It was in the course of that hunt, that he had his first fatal encounter with police, on January 23, during which one police officer was shot and killed in Likani, Giorgi Beruashvili.

Maestro reported that this first police killing followed the same scenario as the last one on April 4 in Tbilisi, which left officer Beka Margishvili dead and one more officer seriously wounded in hospital.

In the 18.-25. March edition of paper, which was before the latest police killing, Asaval-Dasaval published an interview with Abuladze in which he talks about being pressured by Mamuka Khazaradze. At this time, Abuladze was on the run, suspected of killing the police officer in Borjomi in January.

Chubinidze himself was brought in for questioning about his extraordinary claims, which are based on information he has obtained from locals in Borjomi.

TBC Bank denied the accusations made against its head.