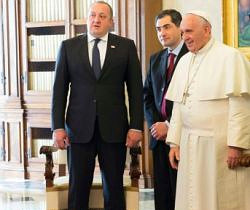 President Giorgi Margvelashvili afterward summed up the meeting as a ‘very important’ one for Georgia.

He said he told the pontiff about security issues, the situation in the Caucasus region, Georgia’s historic role in this region, its unique culture and ‘mission’.

“We also spoke about today’s generation and the difficulties which follow Georgia’s European choice and the future role which Georgia has to play in generating peace and cooperation in the region,” he said.

Another topic was human rights and humanitarian issues, according to the president’s adviser Tengiz Pkhaladze.

The president was accompanied by first lady Maka Chichu. Other members of the Georgian delegation included Secretary of the National Security Council Irina Imerlishvili, head of the President’s Administration Davit Pataraia and his deputy, and economic advisor Giorgi Abashashvili.